The Philosopher and the Policemen 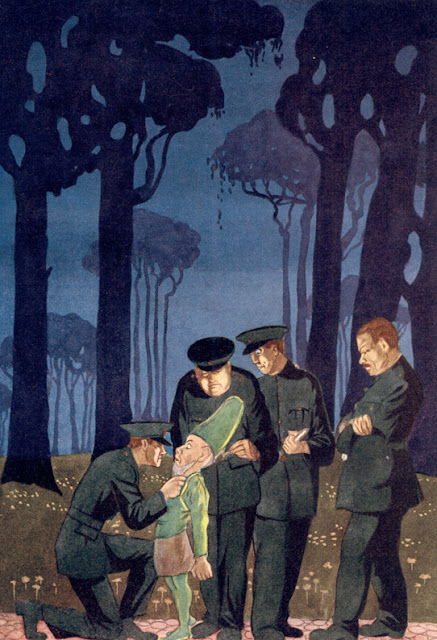 I can't believe I had never heard of this remarkable novel, which clearly influenced Flann O'Brien, James Joyce (who at one point asked author James Stephens to coauthor Finnegan's Wake!) and even Samuel Beckett. The Crock of Gold (1912) is a mash-up of Irish magical folklore and satirical philosophical abuses of digression, with a healthy dose of gender politics (as well as species and popo politics, as you will note in the following excerpt). Stuart and Judy Spence turned me on to the book early this year, and I put it aside halfway through, then got caught up in The Little Ice Age among other things. I just resumed and came across this passage, which seems very timely indeed:

After a few minutes of silence the Philosopher began to speak.


“I do not see any necessity in nature for policemen,” said he, “nor do I understand how the custom first originated. Dogs and cats do not employ these extraordinary mercenaries, and yet their polity is progressive and orderly. Crows are a gregarious race with settled habitations and an organized commonwealth. They usually congregate in a ruined tower or on the top of a church, and their civilization is based on mutual aid and tolerance for each other’s idiosyncrasies.
Their exceeding mobility and hardiness render them dangerous to attack, and thus they are free to devote themselves to the development of their domestic laws and customs. If policemen were necessary to a civilization crows would certainly have evolved them, but I triumphantly insist that they have not got any policemen in their republic —”


“I don’t understand a word you are saying,” said the sergeant.


“It doesn’t matter,” said the Philosopher. “Ants and bees also live in specialized communities and have an extreme complexity both of function and occupation. Their experience in governmental matters is enormous, and yet they have never discovered that a police force is at all essential to their well-being —”


“Do you know,” said the sergeant, “ that whatever you say now will be used in evidence against you later on?”


“I do not,” said the Philosopher. “It may be said that these races are free from crime, that such vices as they have are organized and communal instead of individual and anarchistic, and that, consequently, there is no necessity for policecraft, but I cannot believe that these large aggregations of people could have attained their present high culture without an interval of both national and individual dishonesty —”


“Tell me now, as you are talking,” said the sergeant, “did you buy the poison at a chemist’s shop, or did you smother the pair of them with a pillow?”


“I did not,” said the Philosopher. “If crime is a condition precedent to the evolution of policemen then I will submit that jackdaws are a very thievish clan — they are somewhat larger than a blackbird, and will steal wool off a sheep’s back to line their nests with; they have, furthermore, been known to abstract one shilling in copper and secrete this booty so ingeniously that it has never since been recovered —”

“I had a jackdaw myself,” said one of the men. “I got it from a woman that came to the door with a basket for fourpence. My mother stood on its back one day and she getting out of bed. I split its tongue with a threepenny bit the way it would talk, but devil the word it ever said for me. It used to hop around letting on it had a lame leg, and then it would steal your socks.”


“Shut up,” roared the sergeant.


“If,” said the Philosopher, “these people steal both from sheep and from men, if their peculations range from wool to money, I do not see how they can avoid stealing from each other, and, consequently, if anywhere, it is amongst jackdaws one should look for the growth of a police force, but there is no such force in existence. The real reason is that they are a witty and thoughtful race who look temperately on what is known as crime and evil — one eats, one steals; it is all in the order of things and, therefore, not to be quarreled with. There is no other view possible to a philosophical people —”


“What the devil is he talking about?” said the sergeant.


“Monkeys are gregarious and thievish and semi-human. They inhabit the equatorial latitudes and eat nuts —”


“Do you know what he is saying, Shawn?”


“— they ought to have evolved professional thief-takers, but it is common knowledge that they have not done so. Fishes, squirrels, rats, beavers, and bison have also abstained from this singular growth— therefore, when I insist that I see no necessity for policemen and object to their presence, I base that objection on logic and facts, and not on any immediate petty prejudice.”


“Well, if he talks any more hit him with your baton.”

Original illustration by Thomas Mackenzie, depicting  a scene immediately following the events described above.
Posted by DougH at 3:16 PM