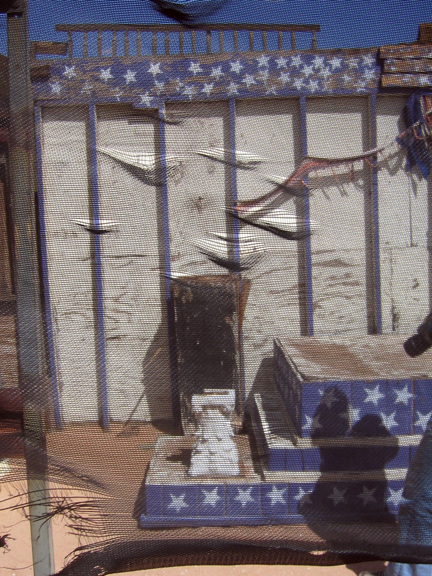 
Thanks to the public library's COVID19 closure, I finally managed to read the copy of Peter Coyote's 1998 autobiography Sleeping Where I Fall that I checked out in February. Highly recommended to anyone interested in the history of the Diggers and the Commune movement of the 60s and 70s. But towards the very end of the book, after a decade of hippie shenanigans, Coyote's path takes a peculiar twist when he is recruited by Gary Snyder in 1975 to be a member of the California Arts Council under Gov. Jerry Brown. Dig his description of Noah Purifoy's philosophy about the role of the creative process in political domain. Artists should be running everything!

"Noah Purifoy is a short, muscular African-American man then in his sixties with gnarly hands, a pugnacious thrust to his posture, and a deliberate and somewhat querulous voice. A Los Angeles sculptor of found art, he is a deep thinker about creativity and culture. According to Noah, all artists work in fundamentally the same manner, no matter what their medium is. Following a hunch, an impulse, ora hypothesis, they make a move, a line, a sentence. They step back and regard what they have done, then they act again and review again, discovering where they are going incrementally. This antipodal shifting between the realms of logic and intuition is the core of the creative process. It is, according to Noah, a problem-solving mechanism of the highest order because it utilizes and integrates both the right and left hemispheres of the brain.


Noah’s “hunch” was that the council itself should operate according to the same creative process, using as its starting position the policy and program intuitions of the members. Since most of us were working artists, we were comfortable leaping into the unknown in this manner. Purifoy asserted further that just as the creative process was a problem-solving mechanism for the artist, the community of artists could serve as a reservoir of creative problem solvers for the state. Artists could even save the state money if they succeeded in cracking some of the obdurate problems plaguing it.

When the council began to design programs, we used Noah's ideas as our template and discovered how readily they expedited our ideas of service. If we want to have art in the state, we reasoned, we should create opportunities for artists to serve the state’s needs. If we paid a subsistence wage for twenty hours of weekly work, the artists would create art on their own nickel in the remaining time. There was no need to pay them for making  art, and doing so has been one of the major controversies and political problems of arts funding. Even the densest legislator could understand the equation of payment for service.


It was fascinating to track the reactions as the council began to explore and articulate this idea. A contrary philosophy known as art-for-art’s-sake was articulated among the representatives of the state’s “High Art” institutions. They argued that art had no statement to make nor any practical significance (which I always considered a dangerous argument to advance when asking taxpayers for their money). They contended that to attach a work of art to any purpose outside of its own organic evolution was to debase the work, andI can certainly agree with the latter part of the statement.

But such arguments could not (or would not) address that all choices — especially by a government agency—are inherently political and reflect the interests or worldview of one group or another, Art-for-art’s-sake is the philosophy about art of a group accustomed to dominance, which mistakes its political power for revealed truth, They did not accept that their worldview was only one among many, some of which were far older and at least as well developed."