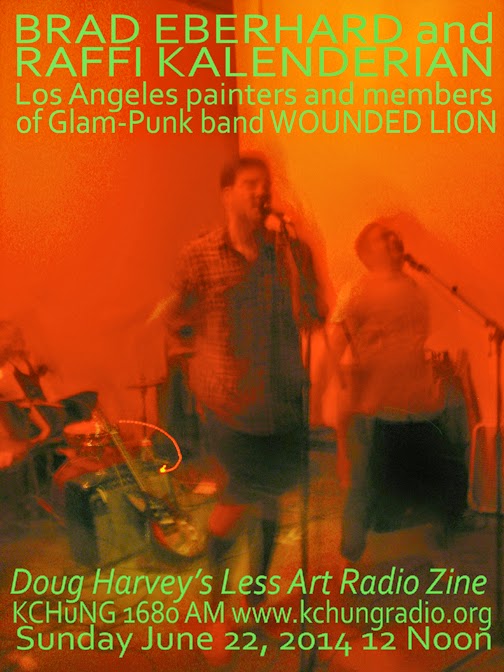 
After the Jump are a couple of the articles I've written about WL: 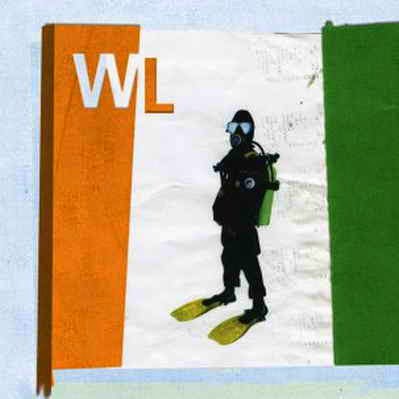 ...It was at a nearby Chinatown gallery — the lamented High Energy Constructs — that I first encountered Picot's work, in an omnibus "boat-themed show curated by painters Brad Eberhard and Raffi Kalenderian (in which I also had a piece). It was there that I also learned that Eberhard and Kalenderian had a band — a ragged, unclassifiable, high-energy construct of its own, called Wounded Lion. WL turned out to be a pretty amazing group. Visually, they present an almost unparsable variation on the standard rock & roll lineup — with former lumberjack Eberhard's towering sincerity and Kalenderian's shamanic seizures and tambourine solos bracketed by Hawaiian-shirted renaissance-geek Jun Ohnuki's frantic musical multitasking, token hotty Shant (brother of) Kalenderian, and a succession of exploding percussionists. Musically, they offer a ramshackle pre- and post-punk synthesis — mixing influences as diverse as Swell Maps, The Clean, ? and the Mysterians, and Creedence Clearwater Revival — that can, in spite or because of its heart-on-sleeve record geekery, get the art girls up and dancing.

After a couple of years gigging and a handful of singles, their eponymous full-length debut has just been released on In the Red, and it's a humdinger! Opening with a pair of their most choogleriffic VU-style workouts — crowd-pleasers "Hungry?" and "Creatures in the Cave" — Wounded Lion thunders along for an admirably concise half-hour like a glam steamroller built from a kit with a couple cylinders missing. The band's willful DIY idiosyncrasy is evident in the production — vocals are tinny or overdriven, overdubs are conspicuously spliced, most of the guitars are, indeed, in the red — but is most evident in the songwriting, which apart from two Kalenderianisms and a cover of Wild Man Fischer's "Omar Walk," is the work of Eberhard.

Live, enigmatic-sounding fragments of Eberhard's lyrics emerge sporadically from WL's wall of fur, and I'm pleased to report that they remain utterly inexplicable: "Got a friend named Carol Cloud and she's coming to your town," he intones on my favorite cha-cha-cha stomper (titled — wait for it — "Carol Cloud"). "She's filled with dust, she's filled with rain — Carol Cloud is her name!" This puzzling anthropomorphic wordplay crops up elsewhere, most notably in "Ryan Belt of Orion," whose protagonist never quite hooks up with the titular astronomic entity or his counterpart Jan Van Allen Belt.

The epitome of Eberhard's gnomic poetics' seamless marriage to the band's mutant garage-isms is probably the magnificent "Pony People," an anthemic rallying call for centaur fetishists to unite. Its middle eight is burnt to a crisp by Ohnuki's radioactive organ solo, and its WTF lyrical odyssey climaxes with the assertion "When you see the ass of a horse and the torso of a man, you'll know that I'm on the scene and I'm firing arrows into targets, into rabbits, into the sky," before dissolving into a chant of "Arrows, Eros, arrows, Eros ..." It's one of those artistic confluences you can't wrap your head around no matter how often you revisit it, which is the only qualification for heavy rotation on my playlist. Brad Eberhard and Raffi Kalenderian are best known to the art world as two of most interesting painters to emerge on the LA scene in the last decade – Kalenderian's ripe, lyrical portraiture bursting straight out of UCLA’s undergrad program and onto the international stage via Chinatown gallery Black Dragon Society’s early flurry of world-beating; Eberhard’s cool-and-quirky Modernist abstractions as the calling card for dealer Tom Solomon’s reemergence in the mid-zeros. Both are notable for a certain trend-bucking willfulness, and an arguably courageous sincerity in the face of the profoundly superficial art world.

This same purposeful idiosyncrasy permeates the music of Wounded Lion, the art-punk band featuring Eberhard and Kalenderian – along with Raffi’s accountant brother Shant, multi-instrumentalist Jun Ohnuki and drummer Lars Finberg (moonlighting from his three Seattle-based bands – that has just released its second full-length album, improbably titled IVXLCDM. Sporting an LA-apocalyptic cover painting of a burning palm tree, the recording was made over the course of just two days last Spring, and captures the fierce exuberance of the band’s live sound with a coherence and bottom end their first outing – splendid as it was – lacked.

The eclectic and impressive array of influences and affinities are still in evidence – their earlier recordings and performances have been compared to such illustrious indie icons as Can, Wire, The Velvet Underground, The Modern Lovers, The Cramps, The Clean and The Vaselines (not to mention Creedence Clearwater Revival and Wildman Fischer). Wounded Lion’s sound – fuzzy electric guitars, droney vintage organ, ragged vocal harmonies and a rattling, thundering rhythm section – reads as a template for the quintessential avant-garage racket.

Another frequently cited precedent is the Talking Heads, which is mostly due to a similarity in vocal range and timbre between Heads frontman David Byrne and Eberhard, who handles the vast majority of WL’s singing chores. But another reason to reference that most un-pin-downable of New Wave acts lies in the songwriting – which is also 98% Eberhard, much of it dating back a decade to his previous band, Two Percent. Byrne’s writing in the Heads was simultaneously personal and fictionalized, and went to great lengths to explore topics and points of view rarely broached in conventional pop music. Wounded Lion’s lyrics seem considerably less calculated, but pack the same alien wallop.

Consider the sort-of title track. In case you didn’t pick up on it, IVXLCDM is all the Roman numerals in ascending order, and constitutes the shouted chorus of the album’s second track, “Roman Values” in which the boys pose the musical questions “Have you heard about the Roman Values? Have you heard about what they love?” Rampant widespread quantification and collapsing empires aside, I’m sure this literary construction is as mysterious to Eberhard as it is to us. But strapped to a careening wave of feedback-drenched power chords, it makes perfect sense.

I heard the band play “Raincheck Vibrations” (the album closer, except for a haunting, fragmentary cover of “Oh, Jim” from Lou Reed’s Berlin) at the Echo a while back, and until I heard the LP, I thought I must have misunderstood. But in fact I had it right – the lyric juxtaposes two fragmentary memories from old TV shows – The Love Boat and Batman into an unreasonable unity, and its strange poetic success brings to mind the fact that much of Eberhard’s most impressive visual art is collage-based. The mechanisms of meaning aren’t what we think they are. And this is never clearer than when these unparseable narratives are filtered through an overdriven amp, they take on an incantory dimension.

The album opener “Monkeys” opens with another interrogative -- “There are two kinds of monkeys in this world: Old World, New World – which one are you?” which brings to mind any number of radical anthropological shifts (Neanderthal/Cro-Magnon; Kurtzweil’s Singularity) before veering into several hundred directions and culminating in a rousing chorus of “Today today RIGHT NOW! Today today today!” Live, these sprawling conundrums become anthemic – though curiously, the most straightforward-seeming crowd pleaser, the show closer “I’m Sad” (“cuz it’s time to say goodbye and I wanna play more music and I wanna sing more songs”) was written not by Eberhard, but by music therapist Gwendolyn Meier in collaboration with an autistic client.

Wounded Lion play out erratically – Finberg has his other acts to attend to, and Eberhard and Kalenderian have their painting careers. Raffi’s finally having his first hometown solo show since Black Dragon folded (at Suzanne Vielmetter in January) so there are no plans to barnstorm the clubs in support of the new release. But keep an ear peeled, and in the meantime, make an effort to learn about the Roman Values. Because things don’t always have to add up in order to count.
Posted by DougH at 5:21 PM