Elliott Hundley on LARZ Sunday at 12 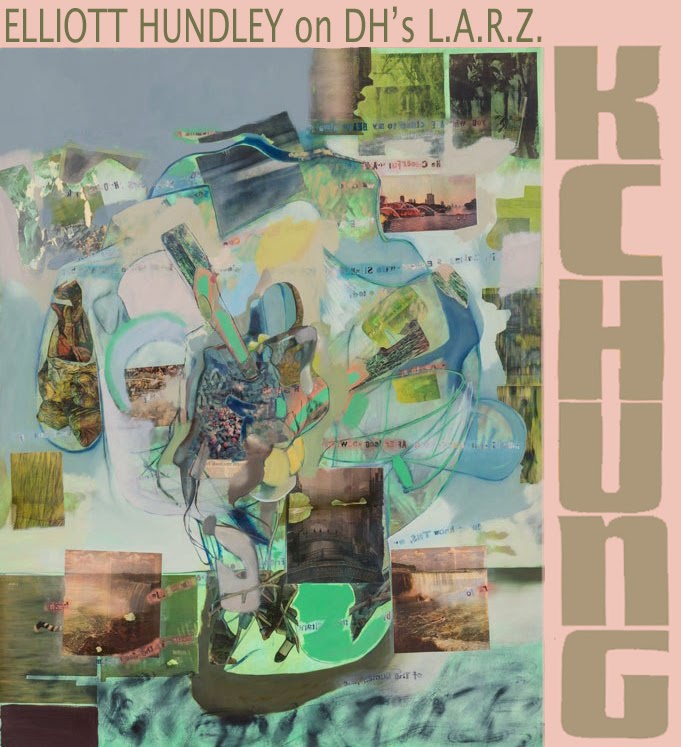 This Sunday, May 11th, 2014 at 12 Noon, painter/sculptor/collagist Elliott Hundley will be joining me on Less Art Radio Zine to decide once and for all who is the more genius: Lindsey Buckingham or Stevie Nicks? (The answer is it's Lindsey.) KCHUNG Radio 1630 AM or at www.kchunradio.org

Also, Elliott's current show of amazing new works - described by David Pagel in the LA Times as the most "muscular and skeletal ... since his first solo show in 2006" - are on view at Regen Projects  through next Saturday (May 17th). I also advise you to check out his recent work from last year's show at Andrea Rosen Gallery.

"...In truth, Hundley had been searching for a method to dislodge his praxis from the tyranny of glue, and—inspired by both the poetically formalist land art of Andy Goldsworthy and Öyvind Fahlström’s magnetic variable paintings—he hit on the humble solution of turning the picture plane into a pincushion. This single small shift had enormous repercussions within Hundley’s craft, allowing him to isolate individual pictographic elements literally and allegorically and to deploy them across a newly liberated topological landscape in a manner that suggested a roiling surface frozen in one of an effectively infinite set of possible configurations.

In addition to these dimensional, compositional, and semiotic benefits, the pins incorporated a whole sphere of connotative content, with the domestic craft of sewing being the most immediately observable. From the outset, Hundley’s collage works have openly embraced the disparaged amateur side of their heritage, most fundamentally in his constant integration of original photographs of emotionally significant personal friends (the artist has likened his work to “the back pages of a high school yearbook”), but most conspicuously in his abundant use of beads, sequins, shells, costume jewelry, ribbons, upholstery, dollhouse furnishings, plastic flowers, peacock and ostrich feathers, and sundry items of the type reclaimed as fine art materials by the feminist artists associated with the pattern and decoration movements of the 1970s. His use of straight pins as both basic structure and (in the case of colored-plastic-headed and other specialty pins) content aligns his collages with the body-centered art of sewing (as well as the world of haute couture fashion) in an emphatically process-oriented manner; sewing pins are explicitly temporary placeholders, meant to be removed as soon as the garment is complete.

Of almost equal and somewhat creepier import are the pins’ connotations of entomological taxonomy: the passion of the insect collector, whose specimens, on retrieval from the killing jar, are mounted on specially coated beetle-juice-resistant display pins, usually with an accompanying didactic panel. This association summons a dark pop cultural archetype of erotic fetishism—à la John Knowles’s 1963 novel The Collector (in which a butterfly collector wins the lottery and repurposes his hobbycraft towards an art student with whom he’s smitten)—that adds considerable gravitas and humor to Hundley’s inventory of partial friends. But it also speaks to the less caricatured fetishism inherent to amateur keepsake collage: the identification of even the smallest ephemeral object as identical with (or a vessel for) a fond or meaningful memory and therefore deserving and in need of preservation.

It is difficult not to imagine these connotations spilling over to encompass the eventual acquisition of Hundley’s finished works by museums and private collectors—and the role of collecting in the history of art to which Hundley so often makes reference. The displays of natural history museums have been an important strain in recent art, from the Museum of Jurassic Technology (which includes several insect exhibits) to Damien Hirst, but Hundley’s approach is more allusive, his categorical impulse filtered through a nonverbal, nonhierarchical syntax, more akin perhaps to Aby Warburg’s Mnemosyne-Atlas (1924–29), or the Internet.

Social stitching and phallic piercing aside, Hundley’s pinning bears several fruitful second-tier connotations, most notably as a form of mutated cartography, where coded pins are arranged to represent troop movements or consumer demographics, in constant flux, simultaneously a site for accounting and strategizing. This aerial topographic motif has emerged as a subtle but typically expansive formal device in Hundley’s art, with undulating contours articulated through variations in the height of the pins and the placement of the collage elements along their length. The results have been uniformly organic: a wall-mounted relief map of a forested landscape or ocean floor, or a giant model of some parasitical worm bristling with setae..."

by DH from "Cut Up or Shut Up: The Unspeakable Narratives of Elliott Hundley" in Elliott Hundley: The Bacchae , published by the Wexner Center for the Arts, The Ohio State University in 2012.
Posted by DougH at 4:16 PM