Between the coupons and the car troubles, haven't had much bloggy time, but since the KCHUNG archive is taking its time slithering over to its new server, I've uploaded the most recent edition of Less Art Radio Zine, featuring the lovely and talented Colin Cook playing his video soundtracks and "musical" offerings from The Charles Ray Experience (including some unreleased material!) and The Legion of Rock Stars. 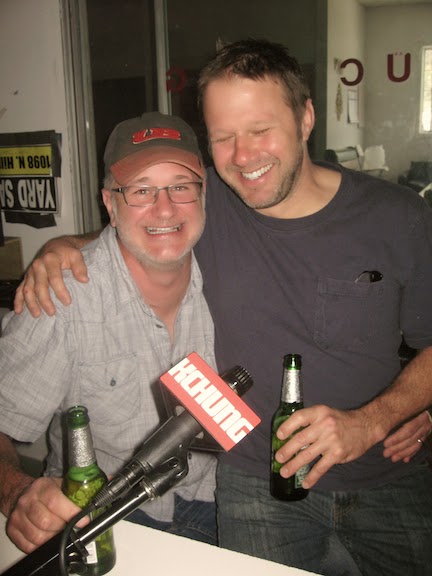 Colin's visual artwork has ranged from interactive kinetic sculptural installations to video, but he has been focussed for some time on his hilarious but disturbing collaborative drawings with Bill Shambaugh, who made a rare appearance on the show as well. While well-known in Europe - with representation in Germany and his current hometown of Paris - Colin's work is less familiar to Angelenos -- an unfortunate lapse, as the collaborative drawings are simultaneously knee-slapping populism and cutting-edge conceptualist drawings, as can be seen from these examples. These babies give a whole new meaning to "objectification!" Won't someone offer this feller an opening?

On the show Colin said something about getting free made-to-order LORS CDs? I don't see anything specific about that on their website or their Facebook page, but you can contact them there, and link through to some of their amazing online videos -- original music videos overdubbed with the Pure Pleasure Processed LORS versions of the songs. Screenings of these were the hit of my 'patacritical Interrogation Techniques Salons last year!

The Charles Ray Experience Anthology: Hooked on Dialectics is available for free download at archive.org, courtesy of Pleonasm Music. Here is the link to an unedited mp3 of Colin and Bill on LARZ on KCHUNG -- available for a limited time: the link.
Posted by DougH at 5:07 PM