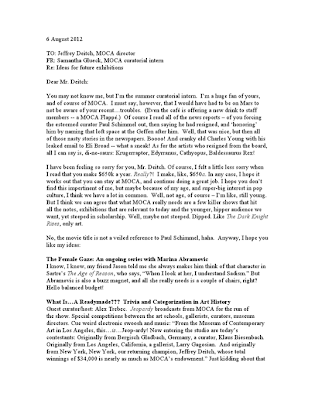 I received this remarkable leaked document in my inbox and thought I should air it out. The only trouble is that these ideas are TOO good. If Jeffrey Deitch followed these step-by-step, he'd win the love and respect of the entire universe. Though a more moderate solution might be to promote Ms. Glueck to that newly restored Chief Curator position.

You may not know me, but I’m the summer curatorial intern. I’m a huge fan of yours, and of course of MOCA. I must say, however, that I would have had to be on Mars to not be aware of your recent…troubles. (Even the café is offering a new drink to staff members -- a MOCA Flappé.) Of course I read all of the news reports – of you forcing the esteemed curator Paul Schimmel out, then saying he had resigned, and ‘honoring’ him by naming that loft space at the Geffen after him. Well, that was nice, but then all of those nasty stories in the newspapers. Boooo! And cranky old Charles Young with his leaked email to Eli Broad -- what a sneak! As for the artists who resigned from the board, all I can say is, di-no-saurs: Krugerraptor, Edyrranus, Cathyopus, Baldessaurus Rex!

I have been feeling so sorry for you, Mr. Deitch. Of course, I felt a little less sorry when I read that you make $650k a year. Really?! I make, like, $650a. In any case, I hope it works out that you can stay at MOCA, and continue doing a great job. I hope you don’t find this impertinent of me, but maybe because of my age, and super-big interest in pop culture, I think we have a lot in common. Well, not age, of course – I’m like, still young.
But I think we can agree that what MOCA really needs are a few killer shows that hit all the notes, exhibitions that are relevant to today and the younger, hipper audience we want, yet steeped in scholarship. Well, maybe not steeped. Dipped. Like The Dark Knight Rises, only art.

No, the movie title is not a veiled reference to Paul Schimmel, haha. Anyway, I hope you like my ideas:

The Female Gaze: An ongoing series with Marina Abramovic
I know, I know, my friend Jason told me she always makes him think of that character in Sartre’s The Age of Reason, who says, “When I look at her, I understand Sadism.” But Abramovic is also a buzz magnet, and all she really needs is a couple of chairs, right? Hello balanced budget!

What Is…A Readymade??? Trivia and Categorization in Art History
Guest curator/host: Alex Trebec. Jeopardy broadcasts from MOCA for the run of the show. Special competitions between the art schools, gallerists, curators, museum directors. Cue weird electronic swoosh and music: “From the Museum of Contemporary Art in Los Angeles, this…is…Jeop-ardy! Now entering the studio are today’s contestants: Originally from Bergisch Gladbach, Germany, a curator, Klaus Biesenbach. Originally from Los Angeles, California, a gallerist, Larry Gagosian. And originally from New York, New York, our returning champion, Jeffrey Deitch, whose total winnings of $34,000 is nearly as much as MOCA’s endowment.” Just kidding about that last part!

The Girl With the IKEA Tattoo: Swedish Romanticism from Gustav the Great to Spotify
Literature, music, fashion, furniture – and a dash of history. Anyone who thinks the sponsorship possibilities -- IKEA, H&M, Soundcloud and yes, Spotify -- have something to do with this is a very shallow person. ;) Raves with Euro DJs, interactive electronica kiosks, runway shows, panels on detective fiction and a few old Anders Zorn paintings thrown in. ABBA performance? (Are they, like, still alive?) Could we get IKEA to donate 20,000 of those little meatballs for the opening? With lingonberries? Please?

Mekka-Lekka-Hi, Mekka-Heine-Ho: The Cultured Manchild from Mozart to Peewee
I think this would be the perfect MOCA exhibition: It has cool art (Gary Panter, Wayne White) and cool music (Mark Mothersbaugh, Mozart), and everyone’s favorite strange little man in a suit. Never mind Peewee’s past peccadillos – that sort of thing is all the rage in Hollywood right now. Thank you, Fred Willard!

The Female Gaze II: Marina Adnauseumovic
Kidding! Maybe this time, though, because it might be getting a little boring, people could try to make her smile. That would be so awesome.

Don’t Leave It to Beaver: The Sculpture of Tony Dow
Oh, why not? Everyone loves the Beaver, and my mom loved Wally. Besides, I hear the sculpture isn’t so bad, kind of a Moore-meets-Giacometti-meets-Lachaise-meets-Dali sort of thing. You know, terrible in a good way. It’s so interesting the way celebrity makes everything just a bit more interesting and weird. Kind of like the Olsen twins.

Gnarly Sachlichkeit: Weimar Beach
From Grosz to Gidget, Dix to decks, Dresden to the Dresden Room – Marty & Elaine live at MOCA! -- this exhibition mixes the old new objectivity with the new old surfin’ culture. I’m not 100% sure of the artistic connection at this point, but I love the title, don’t you?

D’oh! The Subversive Narrative from Homer to Bart
Springfield comes to Little Tokyo, completing The Simpsons’ world pop-cultural domination. Matt Groening is rich, he buys art and he’s married to a hot Brazilian artist – suggest you get him on the board asap. More importantly, get him to underwrite the show. Mr. Burns -- I mean, Broad – will love that.

Ceci N’est Pas Un Half-Pipe: The Surrealist and the Skateboard
Ramp it up, MOCA! The Geffen, inside and out: Sean White, Tony Hawk et al. Lay some Serra torqued ellipses on their side, let the skater kids go crazy on them. What is the connection between Surrealism and skating culture (besides pot)? TBD. In any case, you can always just say it’s surreal, right?

Fifty Shades of Grey: The Exhibition(ism)
Baby-boomers in bondage. Ewww! (sorry) On the other hand, fifty shades of green, baby.

Everybody Poops: Why Not Call It Art?
Based on Tommy dePaola’s best-selling children’s book – my favorite as a child! -- and featuring work by Andres Serrano, Paul McCarthy, Gerhard Richter, Chris Ofili, Karen Finley, Carolee Schneemann, Piero Manzoni, Keith Boadwee, and a host of younger LA artists. I know, right, yuck. But if we want to do shows that break new ground, and bring in the young – my generation is super into poop. Seriously. And then there’s the politics, all the manifestations of shit: from Occupy to Occupied. Use Richter’s toilet-paper roll as poster? Print image on real toilet paper and hand out at the finissage? ;)

The Gangsta Zone: Rebel Sounds From Dada to Reggaeton
Snoop Dogg’s in the Geffen, hella! (Check with security…)

127 Days: James Franco Stuck at MOCA
The wunderkind moves into the Geffen for 127 days. Writes poetry, reads, eats, calls important people, teaches UCLA extension course in art history online, sleeps in the Schimmel loft. Cameras record all, including the bathroom. (MOCA toilet paper!) JF edits his own dailies. During the last 127 hours of his 127 days, he will be wedged between a rock and a marble column – a sly commentary on the difficulties of running a museum these days -- and will then recreate his performance in 127 Hours, live and over the internet. But this time he actually cuts his arm off! Take that, Levitated Mass!

Okay, James Franco probably wouldn’t really be into cutting his arm off. But at least everyone would take him seriously then.

The Female Gaze IV: Marina AbrAPPmovic
Total genius. You simply call her up to stare at you – on every iPhone and Android. No waiting in long lines with other hipsters. How much would people pay for this? A buck? Two? Five? Wait a second: Mr. Deitch, could you possibly give me Ms. Abramovic’s phone number?

Thank you for your attention and time!

I was thinking the same thing, but couldn't find the words. Nice job

I really didn't write this!

Some one whose style you should recognize!