A Flurry of Beacon Press 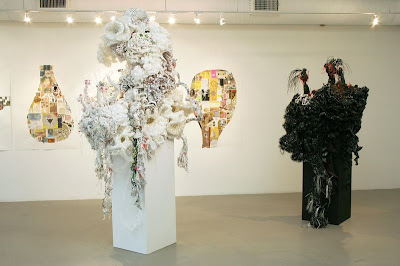 It's official! "Works by... Doug Harvey... complete the sizable presentation!!!" Chris Knight reviewed China Adams' The Loop Show in the LA Times, also noting that "Conceptual art in the 1960s partly proposed that enough objects already exist in the world, eliminating the need for artists to make more. Trash to the rescue. At the Beacon Arts Building, a wide-ranging exhibition titled The Loop Show seems to propose -- at least indirectly -- that the Conceptual dictum is now second nature to artists working with throwaways."

Kudos to the Institute for Figuring on the extensive praise Knight rightfully lavishes on their twin crocheted trash corral reef scultptures, which he declares "the tour de force that steals the show!" Watch for exciting new developments on the IFF front in the new year. Read the rest of Chris Knight's review here. 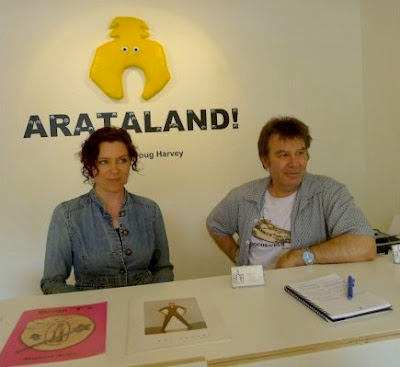 At the other end of the hygiene spectrum, Coagula demon Mat Gleason named Arataland! his Number 2 for 2011! We're Number 2! We're Number 2! Anyway, Mat kindly singled out the curatorial gesture of "bestowing the glory of a solo retrospective on an artist who was not of sufficient institutionally-approved status that would ordinarily warrant this career milestone" as worthy of note, which -- apart from grooving on Arata's oeuvre -- was the point for me.

Even though he missed the point on Chain Letter, I'd have to say Mat's own unbridled curatorial project in the BAB's Critics-as-Curators series Tel-Art-Phone was one of the most surprising and entertaining shows of the year. And I'm not just saying that because I was in it. Read the rest of Mat Gleason's Top 11 Art Shows of 2011 List here. Then use the money grandma sent you for Christmas to order a copy of the exquisite Arataland! catalog.