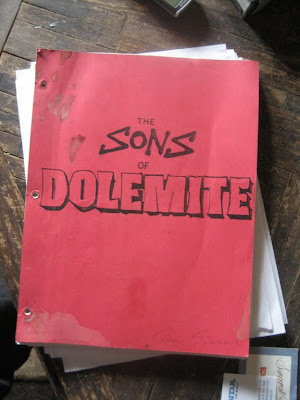 There's this big recycling dumpster I park by every couple of days, and there's often some weird-ass shit there. About six weeks ago, some one left literally thousands of pink leather cell phone cases still in their original packaging there. I thought about taking them, then realized that was just nuts, then came back for them the next day. I had remembered I was supposed to make a piece for China Adams' curatorial project LOOP, about recasting cast-off consumer material as objets d'art, so perfect, right?
Some one beat me to it. In their place were several boxes of shooting scripts -- not that rare a sight in LA (Dani Tull once exhibited a monumental curved wall a la Tilted Arc made from stacks of them). Dogs were waiting and I wasn't that interested in sorting through a bunch of literature anyway -- but a couple of titles caught my eye -- Puppetmasters II & III, and this baby: some kind of sequel to the oddball Blaxploitation classic Dolemite, starring comedian Rudy Ray Moore. 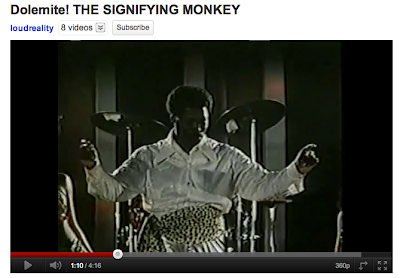 If you haven't seen Dolemite, get thee to a netflix cue -- and meanwhile check ot the bits on youtube, including this spectacular rendition of the African-American folkloric recitation The Signifyin' Monkey, whose titular protagonist derives from that rascally trickster figure of Yoruba mythology, Esu Elegbara. Rudy Ray as Dolemite delivers another classic toast in a weirdly flat street corner performance of Shine and the Titanic. 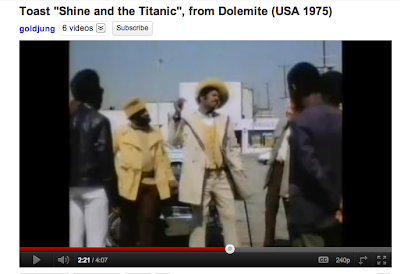 Anyway, I'd never heard of the sequel, which doesn't signify much. But when I started searching online I could find no reference to this movie anywhere, even though there was some kind of shooting schedule tucked into the script. I took the mystery to Mark Jason Murray, the man behind the Rudy Ray Moore is Dolemite! Official Website who informed me that not only had the story never been produced, but that the author, Jerry Jones, didn't have a copy. As far as anyone could tell, I had stumbled across the only surviving version of the script! Here's what Murray had to say: 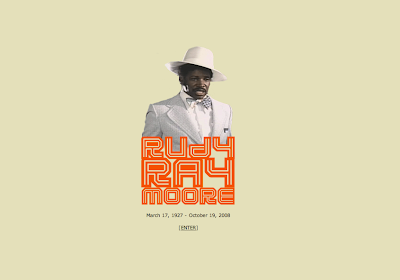 “Thanks to Doug Harvey and his scavenger instincts, a lost part of Rudy Ray Moore history has been re-discovered! THE SONS OF DOLEMITE… the DOLEMITE sequel that never was. I’d been looking for this script and information in regards to it for years! Thankfully, it is now a part of the Rudy Ray Moore archives and further reference material for my biography on Rudy Ray Moore. You are the man Doug!”
So there you have it. I'm the man. And maybe Small Form Films has their next big production prepackaged and ready to roll? Oh, and the bidding starts a hawf-a-million dollahs!
Posted by DougH at 8:48 PM

Next thing you know Doug will be pimping.