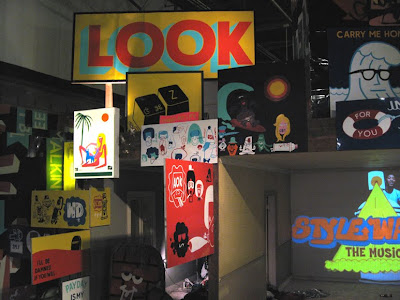 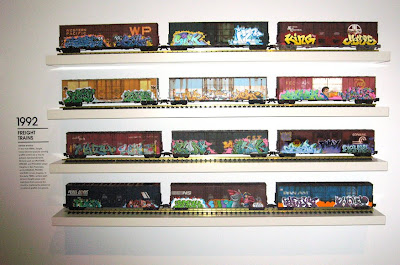 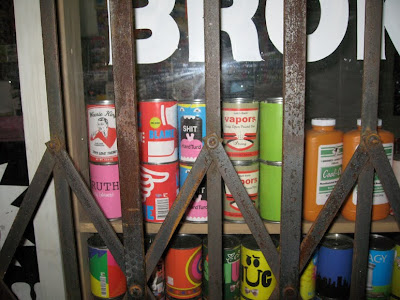 The long answer is you get white middle-class art-world insiders to incorporate the vocabulary of street art into commodifiable artifacts; and when that ceases to be convincing, get them to pose as outlaws and then help them make the transition to "real" art. The short answer, though, is the kicker: You don't. The equation in the question may look elegant on paper, but in vivo it does not compute. Street art taken out of the streets is not street art. There's no compromise, no sell-out, no token integration. There's just a bunch of museum art by a bunch of people who also do street art. Which on paper doesn't look like such a good idea.

Surprisingly, it makes for a pretty engaging museum exhibition in the flesh, largely due to its extravagant incoherence — there are didactic illustrated timelines and vitrines displaying spraycans and "Kilroy Was Here"-era ephemera; there is an interactive DIY filmmaking workshop; there are paintings on stretched canvases, installations, and dedicated video projection theaters. There are some spray-painted walls and a miniature skateboard park — keepin' it real!

The most convincing portions of the show are probably its most simulacral moments — two illusionistic environmental installations: a dark, skanky alleyway courtesy Neckface (in character as a bum throughout the press preview — I doubt he's in residence through Aug 8) and a reconfiguration of the late 2000 Deitch Projects show "Street Market" by Todd James, Barry McGee, and Stephen Powers (aka REAS, TWIST, and ESPO). "Street Market" is a futuristic ghetto of signs, a Blade Runner cartoon warren of storefronts, studios, and squats that brings the hidden artificiality and alienation of "AitS" to the surface, and full circle into a genuinely creative, entertaining, aesthetically innovative work of art. That it does so (alongside Neckface's alley) in what amounts to a variation on 1970s Natural History Museum design — you know, the carefully lit walk-through Indian Village or Frontier Town — lends the entire exhibit a note of critical self-awareness that benefits all.

Many works also gain strength through repetition — Henry Chalfant's deadpan late-'70s documentary photographs of subway cars are arrayed as a monumental brickwork wall that is as energizing as it is elegiac. Erik Brunetti's "LOST (Black Female)" is an accumulation of hundreds of missing pet fliers, offering a refreshing glimpse into entire worlds of street graphics that weren't considered for the show. Several artists — local legend Chaz Bojórquez in particular — demonstrate how the compelling palimpsest of layered calligraphy that results from the collectively authored social performance that is real graffiti may be successfully translated into the language of contemporary painting.

It's no surprise that all these examples derive from text or script-based forms of street art, which gets into trouble when it tries to compete as an image-based medium without the context of transgressive street presence to differentiate it from art-school-trained picture-makers — not to mention the entire advertising and film and TV industries. Why not just show the original art from Vaughn Bode's Cheech Wizard, or some of the hundreds of graphic designers more gifted than Shepard Fairey or Kenny Scharf (though the reconfiguration of Kenny's early-80's blacklight Cosmic Cave installation reminded me of why he was cool in the first place).

"Art in the Streets" is ultimately a hybrid of two ethically ambiguous cultural movements, neither of which bears much resemblance to what it claims to be. Museums are alleged to be educational resources for the public governed by learned consensus — certainly not a tax-shelter arena for rich people's pissing contests. Street Art is supposed to be an inherently political collective visual reclamation of bureaucratically and commercially apportioned public space and consciousness — certainly not a cynical marketing ploy by semi-pro illustrators without the chops to make it in the industry. To the extent that these fictions cancel each other out and create a gap for creativity to flourish, the show is a surprising and delightful success. Revolutionary and historical it ain't.
Posted by DougH at 5:25 PM

once again your brilliance shines in all its awesomeness:
"Art in the Streets" is ultimately a hybrid of two ethically ambiguous cultural movements, neither of which bears much resemblance to what it claims to be. Museums are alleged to be educational resources for the public governed by learned consensus — certainly not a tax-shelter arena for rich people's pissing contests. Street Art is supposed to be an inherently political collective visual reclamation of bureaucratically and commercially apportioned public space and consciousness — certainly not a cynical marketing ploy by semi-pro illustrators without the chops to make it in the industry."