Awash in Ruins with Uncle Chaz 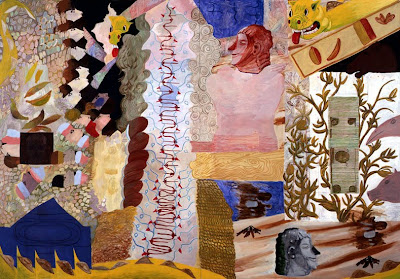 Non-Angeleno readers may not have heard of Charles Garabedian, whose biggest East Coast splash was arguably made as part of Marcia Tucker's landmark 1978 "Bad" Painting exhibit at the New Museum. Reverse provincialism we're used to, but the embarrassing thing about Garabedian's current five-decade retrospective isn't that it won't be traveling to MoMA — your loss, toots! — it's that it won't be traveling to MOCA. Or LACMA. Or the Hammer. I don't often weigh in on museum politics, because, frankly, I don't give a shit — but, please, come on. I don't know a single painter in L.A. that doesn't worship at the altar of Chaz, and it takes Julie Joyce at the Santa Barbara Museum of Art to make this happen? Prophets without honor, and all that — but couldn't we skim a little off Jeff Koons's plastic surgery fund? 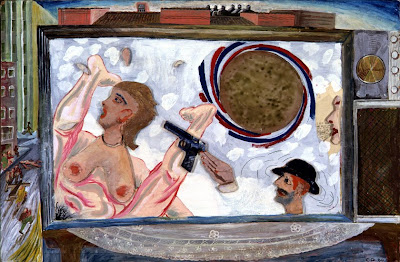 Good on Julie, though, who recently landed upcoast after a decade or so at Cal State L.A.'s Luckman Gallery as one of the city's very interesting cloud of small institutional curators who've taken up the slack of the major museums' regrettable interpretation of internationalism. Because Garabedian is a talent of international stature — say along the lines of Guston-if-he'd-lived — and anyone interested in the possibility of painting as a living practice should see this show. The Guston parallel is pretty apt — Guston actually grew up in L.A. (where he and Jackson Pollock were kicked out of Manual Arts High for publishing a communist zine!) and he was obviously looking at a lot of the same art as Garabedian — just ten years earlier. Their work trembles on the same threshold between figuration and abstraction, and their spatial constructions are the same mix-up of the serene geometrics of Piero della Francesca and the cascading contents of Fibber McGee's closet (look it up on Wikipedia, whippersnappers!). 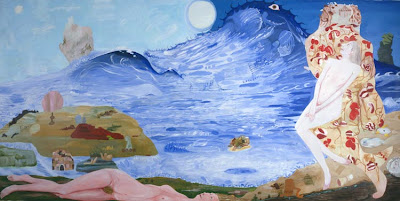 Known primarily for his deceptively awkward figuration, Garabedian's greatest strengths — even taking into account his experimental narrative accomplishments — lie in his astonishing and hard-won formal chops. Grappling elegantly with such syntactical elements as scale, surface, color, line, composition, materials, and illusionistic forms and spaces — with a visual vocabulary as historically informed as it is idiosyncratic — his work can literally take your breath away. In the old-school museum architecture of SBMOA, the monumental "September Song" (2001-2004) and "The Spring For Which I Longed" (2001-2003) seem even more humongous (300+ square feet) than they did when originally shown at the ginormous-enough LA Louver Gallery in Venice.

The gallery these two behemoths dominate covers the most hyperoxygenated period of Garabedian's oeuvre; at the age of 70, the artist hit his prime, propagating a sequence of virtuosic paintings that integrated and transcended his illustrational/decorative impulses in a mythologically charged improvisational extravaganza. Paintings like "Calendar" (1995) and "Garden" (2001) juggle sensual and pictographic modes of abstraction that honor the ancestors while raising the dead: Exquisite Fauvist brushwork bursting crackpot/neo-classical linearity from within, unleashing a tsunami of beautiful semiotic ruins...

Do whatever you have to to see this amazing show at Santa Barbara Museum of Art, 1130 State Street, Santa Barbara, California -- up through April 17, 2011

See more of Garabedian's work online at LA Louver's website.
Posted by DougH at 11:36 AM