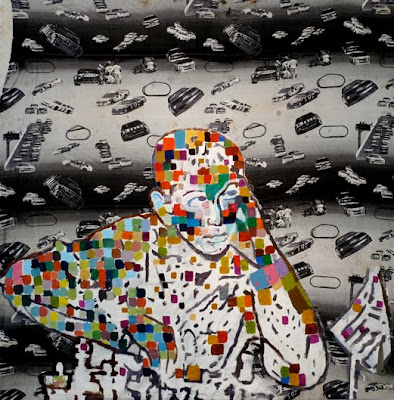 The eight mixed-medium works (all 2010) in Doug Harvey’s “Unsustainable” are undeniably indebted to Rauschenberg’s Combines, but the similarities are primarily formal. Where Rauschenberg transformed refuse into high art in a way that reflected American notions of democratic inclusiveness, Harvey’s approach is more in tune with our current state of environmental and economic crisis: Rauschenberg gone to seed. Harvey’s work reeks of rot and decay. The artist leaves paintings (his own as well as secondhand finds) outside, exposed to the elements, sometimes for more than a decade. He then embellishes the degraded surfaces with old house paint, found objects and gritty materials like aquarium gravel. Stretcher bars are exposed at the canvases’ ripped corners and shredded edges; mold and grime coexist with chipped paint, industrial spray foams and faded, warped and torn photographs. 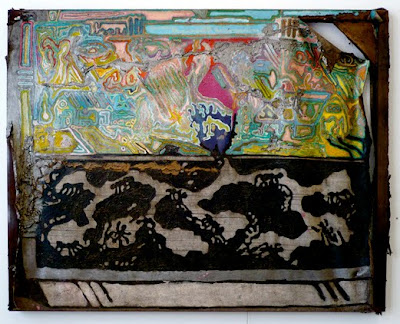 A Romantic melancholy pervades the grunge, though it is occasionally tempered by a dark humor. Few worldly endeavors prove worthwhile in Harvey’s work, the artist consigning to existential doubt or parody everything from art to religion and politics. The dried-mud residue of a defunct ant colony remains on the left side of The Dignity of Labor. On the same battered canvas, the artist has painted a horizontally bisected composition, the lower half presenting what appears to be a subterranean complex of tunnels and chambers, while the upper half erupts into an abstracted, neon-colored and more intricate version of that network form. The piece suggests that human systems, including the contemporary art world, are essentially not unlike ant colonies: elaborate hierarchies of workers toiling to sustain communities that will eventually die out. 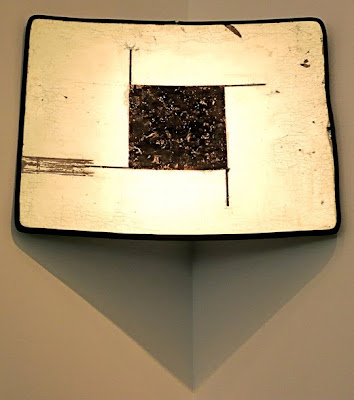 The Eye of Horus, a projection screen with a square foot of dirt collected from the grave of chess champion Bobby Fischer adhered to its center, presents a more tangled meditation on art and life—referencing, among other things, Malevich’s radical Black Square and Duchamp’s re-envisioning of art as chess game. Placed high in a corner of the gallery, this shrine elicits thoughts of hero worship and genius, while also confronting the viewer with the great leveler: death.

The sense of degeneration in “Unsustainable” was conveyed most acutely in Dream House, which suggests an aerial view of a residential property ravaged by fierce weather. Although designed in a modernist style, the house—represented by a dilapidated architectural model found by the artist and affixed to the canvas—is hardly a machine for living. It sports funguslike growths (made of foam) and has been defiled by stains. The driveway, a border of white gravel along the assemblage’s right and bottom edges, remains empty, clean and apparently unused, perhaps emblematic of the abandonment of the American Dream. Recalling ancient ruins, Dream House compels the viewer to consider civilization in relation to the devastating forces of nature. If a hopeful thought could be inspired by such wreckage, it might be that after destruction comes the possibility of new creation.