Over Sideways Down Under Painting 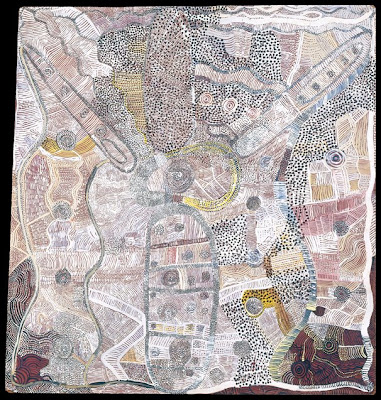 "In Australia in 1971, a 30-year-old white Sydney schoolteacher named Geoff Bardon took a posting in the Aboriginal-relocation community of Papunya in the outback west of Alice Springs, teaching art to the children of the patchwork indigenous community. When he began to encourage them to paint the traditional patterns they habitually traced in the sand — instead of the westernized cowboy-and-Indian scenarios that were expected of them — he inadvertently triggered one of the most remarkable artistic events of the 20th century. The Western Desert Art Movement began as a sudden outpouring of traditional visual material by dirt-poor male Aboriginal elders in this unlikely remote location, and has basically continued unabated, while expanding into a successful multibillion-dollar niche of the international art market and a major source of economic support, cultural pride and political empowerment for the indigenous Australian people." 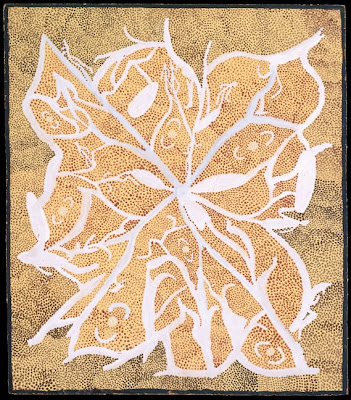 "Less than two years after arriving in Papunya, having broken under the pressure of racist individuals and institutions that wanted to stick to helping the natives with the tried-and-true strategies of incremental genocide, a.k.a. assimilation (and Johnny-on-the-spot carpetbaggers eager to cheat the artists out of even the relative pittances their canvases fetched in those early days), Bardon fled the settlement in the middle of the night, and unwittingly committed himself into the hands of notorious psychiatrist Harry Bailey, whose MK-ULTRA-style “treatments” consisted of lengthy induced barbiturate comas spiked with massive electroshocks — sometimes on a daily basis and often unauthorized. Twenty-six people died while under his care, and many others — Bardon included — were left permanently disabled. Continual pressure from dissatisfied customers, activists (including Scientology!) and journalists finally got Bailey’s “deep-sleep therapy” clinic shut down, and Bailey killed himself in 1985 in the face of a government investigation." 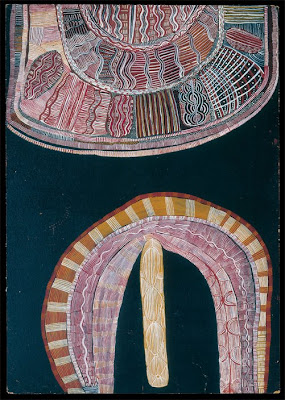 "This peculiar and tragic story of almost accidental inspiration and martyrdom lies uneasily at the center of the history of contemporary Australian Aboriginal painting, so it’s appropriate that a short documentary on Bardon’s Papunya experience — 2004’s Mr. Patterns, --directed by Catriona McKenzie — runs, like an anomalous apparition from another world, looped on a monitor in the middle of the UCLA Fowler Museum’s two concurrent exhibits of Western Desert Painting. Which is an interesting inversion, since the paintings themselves are, more or less, portals to another dimension."

Visit the official website for the Icons of the Desert exhibit here.