North, to Victorian Ferndale, and Partway Back 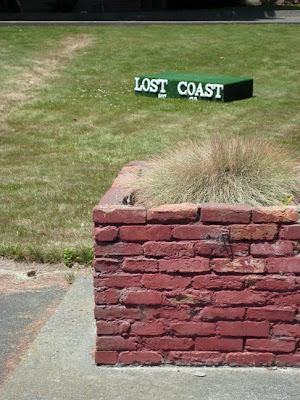 I've been weirdly crippled for the last 2 weeks from what I believe is a new left knee-centric manifestation of The Gout. In spite of this, we succeeded in making the journey north to the Humboldt County Fairgrounds in beautiful Victorian Ferndale for the Lost Coast Kennel Club's annual 2-day show. I managed to get a good deal on an SUV rental with Priceline, but when we got around to looking for shelter, we found ourselves looking at $120 plus $20 per dog (X3!) per night, until I discovered the peculiar world of KOA Kampgrounds -- a family-oriented franchise chain noted for its miniature golf facilities and standardized faux rustic Kamping Kabins. 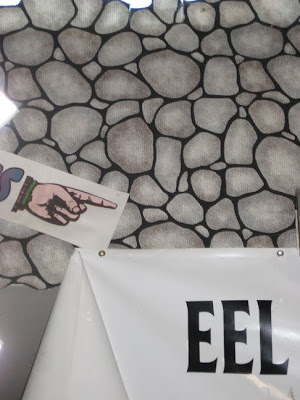 A weird thing happened on Thursday as we were driving to Burbank Airport to pick up the rental SUV -- we were stuck in unusually heavy traffic around noon on the I-5, listening to a mix CD I made and the demo version of the Jacksons' "Shake Your Body" came on and I said "Michael Jackson" and M.A. said "Michael Jackson's causing this traffic jam? What did he do?" That got me thinking what a sad weird life he had, then when we got home it turned out he had just died. Mere coincidence? 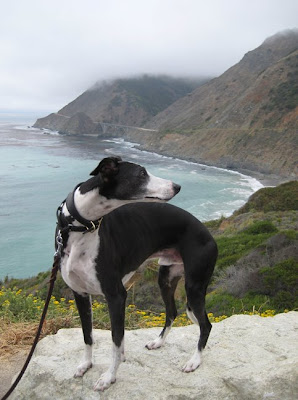 As we headed north, we kept using dog-travel resource fieldbooks to try to locate dog-friendly facilities where three whippets could cut loose with impunity, but kept getting lost. Finally we gave up, and would just bail off the freeway on the outskirts of Bakersfield or wherever, and within minutes were able to locate an empty fenced-off soccer field or playground. This may just testify to the relative plenitude of public space (particularly the un-padlocked variety) outside of LA, but the whole trip was sort of infused with an improvisational grace. 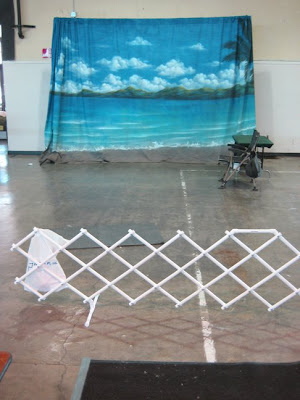 We drove straight through, something like 12 hours. The last part was really David Lynchian, winding through the redwoods with almost no traffic, brights on, sinuous lines of reflector traffic beads pulsing like a Bridget Riley animation, occasional giant trees jutting into the road, or a sudden panoramic array of brightly colored chainsaw-carved cartoon figures emerging from the void, only to be swallowed back again immediately. Good thing I only ate half that brownie! We arrived at the KOA Kampground at 3 or so, found our Kabin and let the dogs romp silently in the standard K-9 Kompound, all of which are equipped with dwarf agility equipment. Here is a detail of the sun-blasted bulletin board adjoining the men's restroom which I discovered in the morning after a few hours shut-eye: 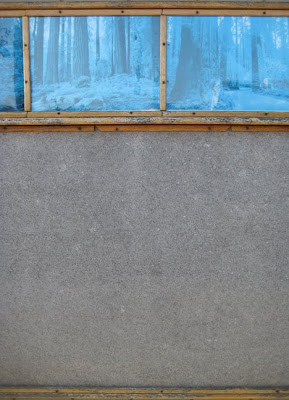 We backtracked a few miles from Eureka to Ferndale and found the Fairgrounds where the dog show was happening. Portfolio did very well on Saturday, winning his first Best of Breed and thereby earning the first point toward his Championship. I got a chance to explore the Fairgrounds and take some pictures, then the whippets practiced their Nosework before they all got their first experience of lure coursing -- a sport where a plastic bag (or something) is dragged around a field in an elaborate pattern very quickly, simulating a bunny running away. Nigel tried a racetrack version a year or so back, and just didn't get it, but he was right on top of the motherfucker this time. Portfolio also did well, and Chloe delivered a breakout performance complete with head-over-heels tumble into the finish line. 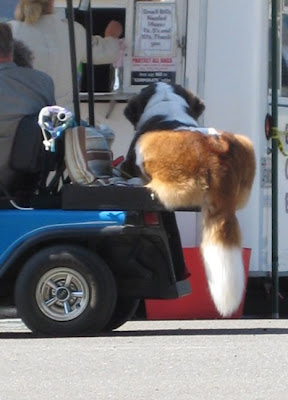 We crashed briefly back at the Kampground, then no-sleep addled, decided to check out the Samoan Peninsula. We didn't have the time to check out their famous Historic Samoa Cookhouse - the last surviving lumber camp-style cookhouse in the West, built in 1893 - but the dog guide lady guided us true in that the place is surrounded by amazing deserted beaches, and the dogs went crazy again. As the sun sank into the Pacific, Chloe posed for her upcoming solo acoustic torch song album cover, and they almost met a seal. 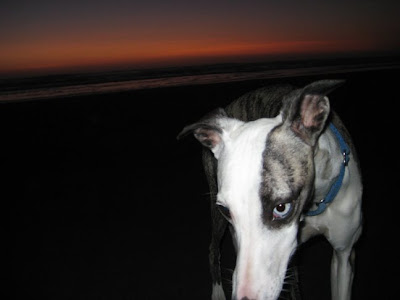 On Sunday Portfolio won 1st in his Class of one, but didn't receive any further accolades, but we had to stick around for the raffle as there was a heavy clear Lucite silhouette of a doberman - a used trophy in fact - up for grabs, and I wanted it for a friend. I didn't win it, but I did come away with a new waterproof overcoat for Chloe. We finally hit the road but realized another 12 hour marathon was out of the question, and since I had had to book the SUV through Monday, the only question was where to stop. We did take a detour to drive thru the Chandelier Drive-Thru Tree in Leggett - Chloe found her passage blocked in the nearby non-drive-thru (but taggable) tree. Also pictured, the sun-blasted KOA Eureka men's restroom bulletin board version of the attraction: 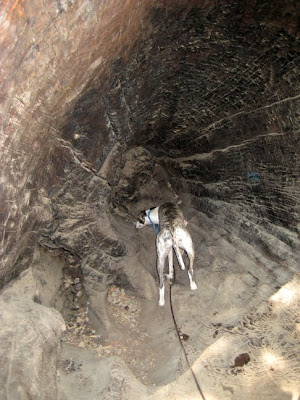 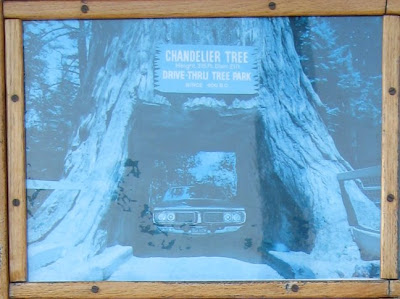 After a doggie break in Santa Rosa I had a brainwave and pulled over into a strip mall Starbucks to try and get online. The Starbucks was closed, but their wi-fi was up and I learned they have a proprietary deal with ATT, and wanted $3.99 to log on. Fuck that. Driving around the parking lot, I picked up another signal, and thanks to Safeway.com I was able to find and book a KOA Kabin in Petaluma, just north of San Francisco. An altogether more gentrified Kampground, where - strangely, for the most wired city in the world - I couldn't get online at all - probably due to all the regular American families managing their facebook accounts, playing WOW and DLing porn in the wilderness LOL. 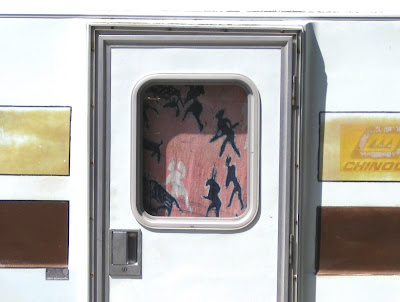 In the morning we decided to take the #1 highway down past Big Sur - something we've wanted to do for 20 years and never got around to. We stopped by in Santa Cruz for a Falafel at the place by the Casino (!) and I took a picture of the back of this beat camper with some kind of pink petroglyph blankie in the window. Santa Cruz. We wound through the clouds on down the coast, stopping to capture images of the whippets mimicking the pose struck by a Hollywood shiksa seconds earlier (scrreee! Shoot me Daddy! click. VROOM!) Anyway, I realized that the reason I never got around to making the trip before was that I subconsciously realized if I ever did I would immediately want to give it all up and live naked in a treehouse on the grounds of the Esalen Institute. Which is where I am now. Thank god they have wi-fi! 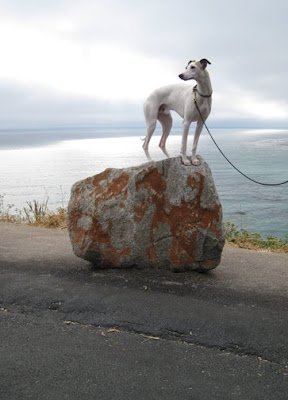 What a coincidence on M. Jackson!
I enjoyed your travelogue. Your photos are like collage/installation/painting. Loved your dog portraits. Congratulations to Portfolio for winning the first place.