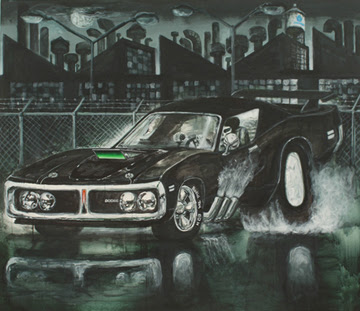 "A case in point is his recent body of Noir hot rod paintings, a sort-of darkly macho Thanatos corollary to his longer-running pageant of full-frontal suburban Willendorfian Veneres (which themselves allude to often-Eros-tinted 70s airbrush figuration à la Alan Aldridge and Peter Saul). Employing the same backdrop of abstracted industrial domination -- Canaday hails from Detroit, site of some of the bleakest post-globalization urban landscapes in America -- as found in earlier studies of the female figure in the landscape such as Fudge Rammers in Their Pajamers (2005), the similarities end there – Canaday’s car paintings are utterly devoid of overt sexual content. 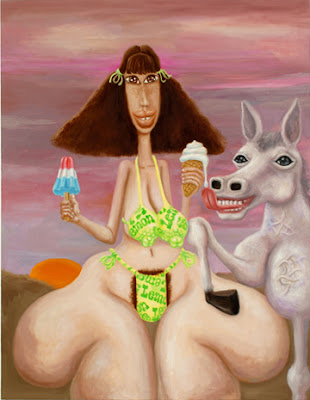 Instead, these remarkable works propose an equivalency between Ad Reinhart and “Big Daddy” Roth – between the chromatically minimal tail end of the existentialism-tinged Abstract Expressionist school and the more truly subversive eruption of the Grotesque which was occurring throughout American popular culture over the same period. The geometric complexity in a piece like Burnin’ (2007) is almost as compelling as the outlaw imagery it encodes. Drawing substantively from the automotive outsiders of Roth Studios (including Roth himself, Robert Williams - whose comic-book advertisements for Rat Fink tee-shirts bear a resemblance in wit and graphic complexity to Reinhart’s How to Look collage strips - and Dave Mann, later of Easyriders fame), Canaday’s painterly hot rods posit a plausible integration of the transcendental geometry and improvisational materiality of the church of Abex with the post-Jungian pop mythology of EC horror comics."

published in conjunction with Canaday's shows at Black Dragon Society (closing October 20th) and Baronian-Francey in Brussels (opening in November). The book should be available at Black Dragon any day now. The Black Dragon show only includes one of the car paintings, but they may be still up in the auxillary space, and there'll be a chance to see at least one more before the new year. 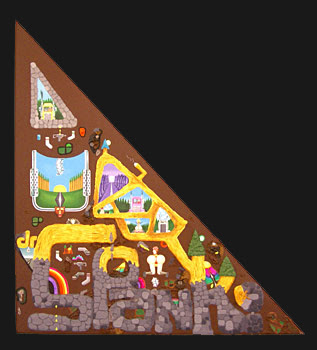 Dough on the Go! reader Jacques de Beaufort put in his two cents in an insightful essay on his own blog and documented the openingto boot. 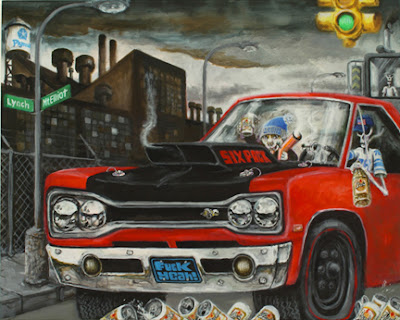