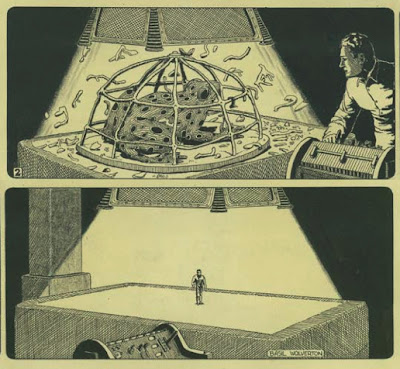 Just finished a catalog essay for an exhibition of Glenn Bray's collection of work by the amazing cartoonist Basil Wolverton, which will open at Grand Central Art Center in Santa Ana in September. Bray's an amazing guy who, among other things, started Carl Barks doing oil paintings of Uncle Scrooge and produced Fred Blassie's "Pencil Neck Geek" single. Above is an episode of Wolverton's beautiful 1930's unpublished strip "Ethan Downing" from Bray's collection. The strip has elaborate typed narrative descriptions stuck on the backs of the drawings, but I prefer the WTF factor that they have in this form, as in "WTF is that stuff dropping on that giant frog inside the yurt frame?" I stacked the 2 panels so they'd be more visible here, but the originl format was side by side, daily strip style.
Posted by DougH at 12:43 PM

holy cra......p.... those images are amazing. i've never seen anything quite that early. should be an amazing show.

Wow! The first public showing of Basil Wolverton originals since 1994. 200-300 originals of every era of his works from the collection of Glenn Bray accompanied by a book of art from the show published by Last Gasp. Cool!