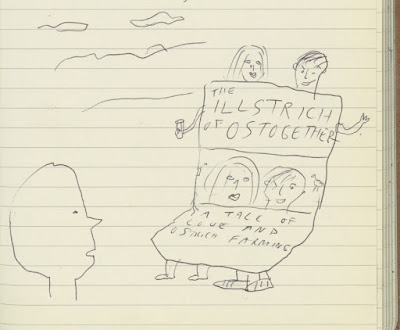 At one point in my life I kept a dream journal, but I began remembering so many in such detail that I was writing for a couple of hours every morning, which cut into my drinking time, so I quit.

Since then I've remembered a lot of dream stuff anyway, but lately I hadn't been, and about a week ago I thought "I wish I was remembering more of my dreams these days."

Lo & Behold, I remembered two big dreams in two days - the first one was scary, and I might get around to recounting it if I can remember it, but the second one has action film option written all over it, so I wrote it down, and I figured I'd share.

So in the dream, the night before the above illustrated moment, I was walking through a busy urban shopping district, lots of people bustling, and the guy sitting on the right there sidles up to me and starts to hustle me to do some kind of job for him. This isn't weird - turns out later I'm some kind of private investigator.

This guy's just a kid, doubt he's even 20 years old. Very enthused, but it's hard to get a handle on what the job entails, because he immediately gets into a ridiculously theatrical kung-fu fight with a black pimp-like dude, just slightly older than the kid. Some old unfinished business, I figure.

They both strike outrageous poses and make Bruce Lee squawks and tongue-clicks -- but when they make contact I see it's for reals. They're both very accomplished fighters. People notice, but don't seem to be very freaked out.

The kid seems to be the superior combatant, and each time he lays the pimp dude flat, he declares some arcane score, like "17 for me against 875 for you!" and the pimp guy then slips away. We continue walking past these open stores, and he resumes his pitch, but the black dude leaps out again and it happens all over, 3 or 4 times -- the kid winning, and modifying the score each time.

Then, just as we've turned to go through a store-lined underground passage, he's back again! But this time pimp dude lands a crippling kick to the kid's leg! In obvious pain, he still manages to declare "That's 20 bucks to you, and 10 for me!" This morphs into some kind of rap (sorry, can't remember it, but it was sort of like a musical theater version of rap), as the pimp dude picks him up and slams him down onto a display table of high end Chuck Taylor sneaker copies, which the both of them, in a sort of choreographed routine, begin stuffing into conveniently placed gift bags, as the musical number continues, with backup singers and dancers gathering around.

Just then, another black dude is standing next to me - this one's wearing glasses, with a sort of Curtis Mayfield vibe. He says "Harvey, are you buying this shit?" I recognize him from somewhere - school? This is when I realize I'm a P.I. and I know him from the street. He's with a woman and they start walking with me, away from the ongoing fracas.

"The hip-hop-lite kung-fu shoe commercial musical?" I shrug "I'm just rolling with it."

"What did that kid want from you anyway?"

"He wants me to use my skills to determine who has been sitting in a series of couches."

At this, Curtis looks at his lady knowingly, and a sequence of quite beautiful visual aids appear in the air to illustrate how traces of various materials -- perfumes, hair oils, body odor, DNA, etc -- could linger on and around various couches. They look like shifting, layered, color-coded pointillist snowflake patterns. Curtis and his lady move off, and I worry that I've said to much. Who is this cat anyway?

But the next day, I'm summoned to the hillside estate of the kid, who's unperturbed (and seemingly uninjured) by his defeat. He receives me on the back patio overlooking a beautiful, hilly Southern California landscape, and wants to continue discussing the job.

His girlfriend is with him, and they're wearing a puffy rectangular twofer robe, printed to look like the cover of a mass market book entitled "The Illstrich of Ostogether: Tales of Love and Ostrich Farming," with a picture of him and her on an ostrich farm but otherwise looking exactly as they do before me. I recognize the title as a play on the familiar phrase "The ostrich of illtogether" then actually wake myself up laughing!