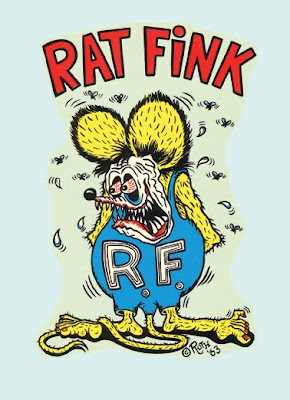 If there is a single image that symbolizes the outsider status of "Lowbrow" art (in spite of the movement's transformation into a marketing side-stream for illustration professionals) it's the iconic figure of Rat Fink — the grotesquely oozing, drooling, contorted cartoon rodent that served as the corporate mascot and alter-ego of Ed "Big Daddy" Roth, 1960s custom-car designer and figurehead of a marketing empire that encompassed plastic model kits, silk-screened tee-shirts, decals, and other mass-produced artforms. Rat Fink is to the Juxtapoz set what Duchamp's "Fountain" is to Modernism — in more ways than one, as it turns out.

As I wrote in my 2003 essay "Brother Rat Fink and the Eruption of the Grotesque in Popular Culture" (published in Doug Nason and Greg Escalante's "Rat Fink: The Art of Big Daddy Roth, Last Gasp"): "It's virtually impossible to assess the full formative impact of Rat Fink on the generation of Americans that was to make up the counterculture.... Rat Fink and the other hot-rod weirdos entered the pop vernacular with a speed and depth of penetration unthinkable to the captains of the advertising industry. My own first exposure to the character was in the form of a sketch by another kid at school. It was Rat Fink all right, and widely recognized and appreciated, but it was a copy of a copy of a copy; its authorship and Kustom Kulture provenance lost to us. Only its iconic resonance held our attention and fired our imagination."

Now it appears that this authorial indeterminacy was closer to the mark than many realized. In a new book from Last Gasp, the family of an obscure but influential Los Angeles graphic designer makes a convincing claim that Don "Monté" Montéverde — not Roth — was the author of the quintessential Lowbrow mascot. Bill Selby's "Monté: King of the Monster Age Decal" tracks the career of the UPS driver turned decal designer, whose rough-hewn monsters, devils, aliens, and fork-skewered eyeballs ("Pass the Mustard," 1959) were an enormously influential and previously unacknowledged element in the postwar rise of the pop-culture grotesque...

I am excited to read this- I, being a young artist and illustrator have been inundated with rat fink and his filthy spawn my whole life- I even remember the ads in the back of my Spider-Man comics with the rat fink model hot rod. I am curious about its seemingly unending appeal to the artists of my generation.