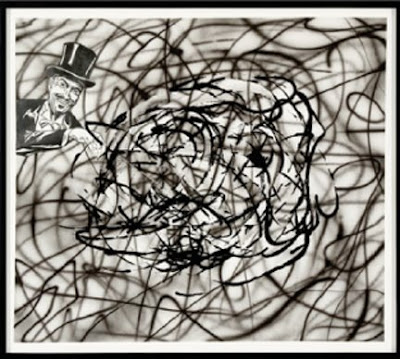 "Curating isn’t always as easy as it looks. It’s rare to find a group of concurrent solo projects that genuinely complement one another — just because two artists happen to use images of trees or refer to cartography or have Photoshop doesn’t necessarily mean their work will have anything more than a superficial verbal resemblance. Museums regularly stumble over this sort of literalism in spite of their long-term scheduling and art-historical resources, and commercial gallerists — with their relatively fast turnover and propensity for attention-grabbing sound bites — are particularly prone. 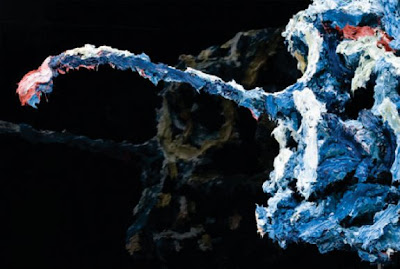 Which is why, when a triple whammy like the current lineup at Patrick Painter crops up, it’s worth looking a little deeper. On the surface, Jim Shaw, Peter Saul and Glenn Brown seem like an almost arbitrary selection from the gallery’s stable — artists from three distinct generations, two of whom work at opposite ends of the U.S., while the third hails from another continent altogether. L.A.-based Shaw works promiscuously across the media spectrum, from highly rendered figuration to abstract video, while recently ensconced Manhattanite Saul is strictly a painter’s painter. Londoner Brown is also an old-school painter as far as materials go, but his near-obsessive appropriationism (which landed him in legal hot water with one of the science-fiction illustrators from whom he cribbed) lies at the opposite pole from Saul’s seething pop expressionism. 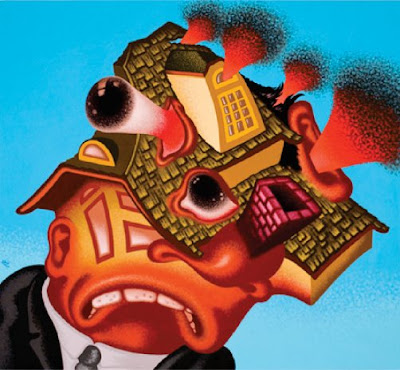 Maybe appropriation is the key? “That’s not really a factor with Peter,” says Shaw, whose own works are frequently chock-a-block with obscure pop-culture references, “and I’m not exactly an appropriator in the way that Jeff Koons or Glenn are. I do occasionally utilize something that somebody else did. But not in a direct way where the appropriation is important to it. For example, I’m thinking of taking pictures of children similar to the ones in these Christian calendars — often I’ll set up a photograph that looks similar to the preexisting things that inspire me, which is a somewhat different action from Glenn.”

Read the rest of Agree to Dis here.

See the shows at Patrick Painter through Jan 10.
Posted by DougH at 12:37 PM