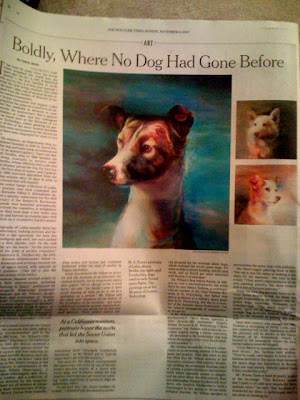 In a full-page full-color story the Sunday New York Times outed my spouse M.A. Peers as the artist responsible for the space dog paintings at the Museum of Jurassic Technology. You can access the story online here or check the comments. M.A.'s first show of new work in a few years is scheduled for May at the Rosamund Felsen Gallery. Top photo by Tull, bottom by Bastian. 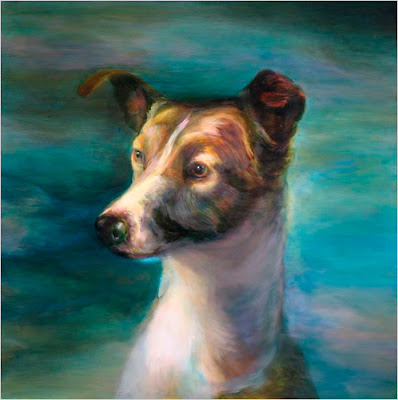 ART
Boldly, Where No Dog Had Gone Before
By CAROL KINO
Published: November 4, 2007
CULVER CITY, Calif.

IT has been 50 years since the Soviet Union propelled the world into the space age. On Oct. 4, 1957, it launched Sputnik 1, the first satellite to circle earth, and on Nov. 3 of that year Sputnik 2 carried the first living creature into orbit — the mutt Laika, one of several strays recruited from the streets of Moscow to become canine cosmonauts.

A bronze monument that depicts Laika leaping from the palm of a hand is to be unveiled this weekend in Moscow to commemorate the anniversary. But a quieter celebration of Laika and her colleagues can be found here at the Museum of Jurassic Technology, where glowing oil portraits of five of the most lauded muttniks (as they were nicknamed by the American press) have been displayed for close to two years.

In the museum, an improbable little establishment founded in 1989 by David Wilson, the dog portraits hang on oxblood-red walls in an upstairs gallery. There are Belka and Strelka, who in 1960 became the first living creatures to survive orbit; Zvezdochka, whose 1961 trip with a life-size human dummy paved the way for Yuri Gagarin, the first man in space; and Ugolyok, who in 1966 returned unscathed from the final dog mission after 22 days in orbit (a canine record that still stands).

In the center hangs a likeness of Laika, whose journey was both triumphal and tragic. Because Nikita S. Khrushchev demanded a splashy celebration for the 40th anniversary of the Bolshevik Revolution, her capsule was launched precipitously. She survived the transition to weightlessness but died from heat a few hours into the flight and burned up months later with her vehicle as it re-entered Earth’s atmosphere.

Photographs of Laika usually show her in the laboratory, looking nervous and
beleaguered in her spacesuit. Yet here she looks intelligent and alert, her ears cocked
against a blue, skylike void. On the wall above her are the words “All the universe is of the lives of perfect creatures,” from Konstantin E. Tsiolkovsky, the 19th-century
Russian schoolteacher whose visionary drawings and writings foresaw the concept of space travel, with animals as the first pioneers. (This fall is also the 150th anniversary of his birth.)

The museum planned several events to celebrate both anniversaries, including “Woof:
Barking in Space,” performed by the avant-garde Belarusian puppeteer Yelena Zhelezov and Mr. Wilson’s daughter, DanRae; and screenings of “Kosmicheskiy Reis” (“Cosmic Voyage”), a 1935 film about a moon flight based on Tsiolkovsky’s predictions about living in space (it depicts a cat in a spaceship), and “Nash Vek” (“Our Century”), a poetic reinterpretation of the Soviet space effort made in 1983 by the Armenian filmmaker Artavazd Peleshyan.

Tucked into a small storefront on Venice Boulevard, the museum has been called a modern-day wunderkammer and is the subject of a 1995 book, “Mr. Wilson’s Cabinet of Wonders” (Pantheon), by Lawrence Weschler. In 2001 Mr. Wilson received a MacArthur Foundation “genius award” for his array of curious and awe-inducing exhibitions, which include dioramas and special effects that bring old wives’ tales and folk remedies to life; letters written in the early 20th century to astronomers at the nearby Mount Wilson Observatory; a homage to three ethnologists who documented cat’s cradles; and a collection of decaying dice donated by the magician Ricky Jay. There are all manner of miniatures, among them micromosaics of flowers made by Henry Dalton from butterfly wing scales and human hair sculptures fashioned within the eyes of needles by Hagop Sandaljian.

Some characterize Mr. Wilson as an artist and the museum as an elaborate conceptual artwork, but he strenuously rejects that notion. “We’re allergic to the A-word here,” he said. “Art doesn’t seem to have much bearing on what we do. It can be a limitation on a person.” Mr. Wilson said the place was “modeled on the history of the institution of the museum,” and many exhibitions comprise genuine historical artifacts. The rest are produced by him and staff artisans. Their subject matter can sometimes seem “strangely, wonderfully humorous,” as Mr. Wilson put it, “just because that’s the way the world is.”

The seed for the idea to commemorate the space dogs was sown by one of the museum’s diorama artists, M. A. Peers, who trains dogs and is known within the Los Angeles contemporary-art world for painting realist depictions of purebred dogs on upholstery fabric.

“In the mid-’90s,” Ms. Peers recalled via e-mail, “I initiated and developed a curatorial proposal for the museum about dogs, which included the Soviet space dogs. We were unable to secure funding, but the idea stuck, and as David got more obsessed with Russia, it re- emerged.”

Mr. Wilson’s first trip to Russia, in 1995, was to visit a microminiaturist, but while there he met Olesya Turkina, a contemporary-art curator at the State Russian Museum in St. Petersburg. Her father was once a professor at a military space academy in St. Petersburg, and she is a member of the Russian Space Federation (“for the cultural propaganda of cosmonauts,” as she put it).

To Mr. Wilson’s delight, her husband, the psychoanalyst Viktor Mazin, operates a very Jurassic-like institution: Freud’s Dream Museum in St. Petersburg. (“Both museums,” Ms. Turkina said in heavily accented English during a phone interview, “are dedicated to the knowledge that was left on the margins of our very much totalitarian societies.”) Ms. Turkina became Mr. Wilson’s collaborator on an increasing number of Russian loans and projects. (She also stars in the two films that Mr. Wilson screens in the museum’s miniature 19th-century theater, one retelling the archetypal Russian story of Levsha, a prerevolutionary microminiaturist whose ingenuity comes to naught, and the other about the 19th-century Russian philosopher Nikolai Fyodorovich Fyodorov, who inspired Tsiolkovsky’s work.)

Encouraged by her access to Soviet technological marvels, Mr. Wilson decided to memorialize the space dogs with portraits. Ms. Peers began painting them in 2001. “For me it was the same as making a diorama for the museum,” she said in her e-mail. “They aren’t representative of my own painting practice, but were created with a sort of fictional persona.” While her own dog portraits have an obvious Social Realist streak, for these she sought inspiration in old masters who depicted dogs, especially Velázquez and Gainsborough.

“The space dogs,” she wrote, “gave me an opportunity to paint straight dog portraits without irony and rely on the Jurassic to provide the context.” Soon that context will change, for Ms. Turkina is arranging to bring Laika and her confreres full circle. Sometime in 2008 the portraits will be shown at the Space Museum of St. Petersburg, which is housed in the laboratory where the first Soviet rockets were developed. “It’s a chance to commemorate our common utopia,” Ms. Turkina said, adding: “They’re really very happy to have an exhibition devoted to the space dogs because the space dogs are legendary in Russia. They are real heroes. Nobody asked them if they would like to fly.”
Mr. Wilson finds a kind of poetic justice in the exchange. “The Russian people don’t need to be told how wonderful these animals were,” he said, “but we think it’s wonderful for them to understand they’re not alone in thinking so.”