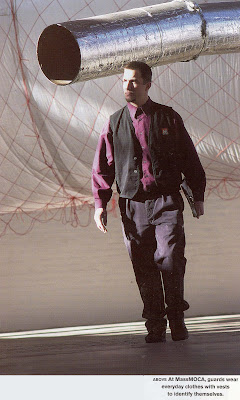 I actually made it out to a couple of openings. The unveiling of the Getty version of Tim Hawkinson's Uberorgan (and concurrent 'Zoopsia' exhibit) was embiggened by the gourmet hot dogs and presence of Gordon Haines. My recent LA WEEKLY studio visit with Tim is detailed here. This clipping -- from the Uberorgan's original installation at Mass MoCA in 2001 -- is reminiscent of Cecil Beaton's Jackson Pollock fashion spread in Vogue executed almost exactly 50 years previously. I'll see if I can't dig up the pictures I took of "der Ub" in Manhattan during the Whitney retrospective in 2005.
Posted by DougH at 7:15 PM