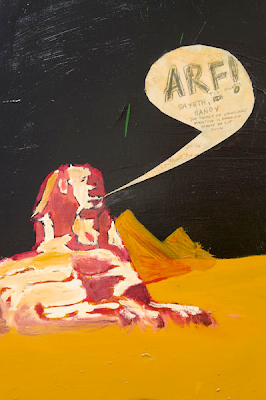 Wally Hedrick at the Box

Wally Hedrick (1928–2003) was one of the seminal figures of the West Coast Beat-era artistic renaissance. It was Hedrick, in fact, who approached Allen Ginsberg in 1955 to do a poetry reading at the Six Gallery, resulting in the famous ground-zero happening of the Beat phenomenon, including the first public reading of Ginsberg's "Howl." Hedrick was a founding member of Bruce Conner's Rat Bastard Protective Association, introduced Jerry Garcia to the blues, and supported his wife — painter Jay DeFeo — as she labored on her 2,300-pound masterpiece, The Rose, for eight years. He was a beloved and influential teacher in the Bay Area for decades.

So why is his upcoming solo show at the Box in Chinatown only his third in Los Angeles? Granted, that S.F. assemblage crowd was pretty disdainful of L.A. — especially after Wallace Berman was hounded out of town — and Hedrick was notoriously uninterested in the social dimension of Art World stardom. But the fact that Hedrick was using his art practice to actively denounce America's presence in Vietnam as early as 1959 might have had something to do with it as well.

Although Hedrick created stellar artworks that anticipated assemblage, kinetic art, pop, neo-expressionism and so on, his habit of not-very-carefully concealing messages like "Fuck the FBI" in his paintings (Bury-Berry, 1964) pretty much guaranteed his status as an artist's artist. His two previous L.A. shows — both posthumous — were almost polar opposites: Michael Kohn Gallery's 2007 "Estate Sale" featured mostly Hedrick's late, deadpan appropriation paintings of antique advertising engravings. The Box's previous outing re-created 1967's War Room, an architectural environment originally built from early works Hedrick had overpainted in black monochrome. The new exhibition — opening September 17 — will land somewhere in between, focusing on his sometimes garish political paintings from the '80s, but ranging from 1962 to 2000. —Doug Harvey