Todd Schorr and Gustavo Hererra through ... Aw forget it... 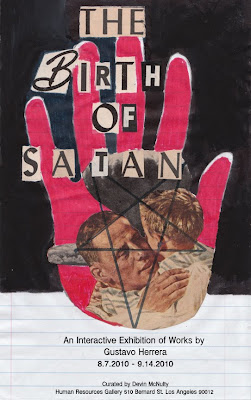 If you've been out of town for the summer, or just hibernating, you may have missed a couple of shows that close after this weekend [ie: Sept 11], but shouldn't be missed. At Otis' Ben Maltz Gallery, lowbrow/pop-surrealist/whatever painter Todd Schorr is the subject of a last-decade survey featuring more than 50 paintings, drawings and sculptures from Schorr's pop culture–saturated fever-dream imagination, rendered with a meticulous technique that blends his illustration training with a passion for the Old Masters, and a horror vacuii compositional frenzy that is equal parts Will Elder (early MAD magazine) and Hieronymus Bosch (early ergot poisoning).

Inspired and encouraged by lowbrow sensei Robert Williams, Schorr ditched a lucrative commercial-illustration career in the mid-'80s to become one of the first artists to define the underground movement of populist imagism that became a worldwide grassroots phenomenon in the following decade. Fan favorites like The Anguish of Carl Akeley (2008), The Spectre of Monster Appeal (2000, collection of L. DiCaprio – eeeeeeeek!) and Ape Worship (2007), the showstopper from Laguna Museum's 2007 "Juxtapoz" show (and an in-person must-see if only for its ornate Schorr-designed frame) vie with lesser-known works to give a solid glimpse of the kind of obsessional visionary craftsmanship that guarantees this frequently scorned subculture isn't going to go away.

Across town at the dead end of Chinatown — and at the far end of the meticulousness spectrum from Schorr — Gustavo Herrera has resurfaced with a roomful of his dark, funny, formally virtuosic but slapdash constructions. Herrera — whose similar installation is pretty much the only thing I remember about the first "All-MFA Supersonic" exhibit in that wind tunnel in 2004 — had a couple of crazy-ass shows at Black Dragon, including the one with his former collaborative posse 10lb Ape, where they boarded themselves inside a multimedia assemblage cube and blew pot smoke out at bewildered viewers.

Then Herrera dropped off the radar for a while, only to pop up here, at Human Resources — a new collective-project gallery in the former Parker Jones/David Kordansky space at the end of Bernard Street. "The Birth of Satan" is a multimedia interactive art installation including paintings, sculpture, assemblage, a hilarious video installation, a table of satanic zines and other literature, and a series of performances. There are cardboard and macaroni masks, abstract sculptures named for famous friends of Satan (e.g., Kenneth Anger), a Duchampian reclining-nude installation and a cutout silhouette of the USA collaged with horrific celebrity photos of Paul McCartney, Prince Harry, etc. — all amended with a little Hitler mustache. Everything is deceptively slackerish: Spend any time with the work and you'll be bowled over by Herrera's scathing wit, philosophical and art-historical sophistication, and seemingly offhand aesthetic virtuosity 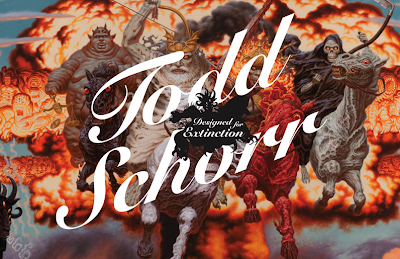