Whew! Merely quoting the spam below triggered the overzealous spambots of my host organism, preventing me from posting. Apparently they have some kind of prejudice against "irrelevant, repetitive, or nonsensical text." Also, my digital camera stopped working just as I was about to photograph an amazing spray-painted ottoman on Sunset Blvd. In lieu of that (I'll try and get an image of it over the weekend) here is my entry in the National Portrait Gallery's Outwin Boochever Portrait Competition: It is entitled Erik Knutzen: Thought Stylist.
Posted by DougH at 10:20 PM No comments: Links to this post

I had to see how this looked... And share this urgent message from the FBI Foreign Remittance Telegraphic Dept regarding a large bank transfer in my name from C.B.N Bank Nigeria District:

Secret Diplomatic Payments Are Not Made Unless The Funds Are Related To Terrorist Activities Why Must Your Payment Be Made In Secret
Transfer, If Your Transaction Is Legitimate, If You Are Not A Terrorist, Then Why Did You Not Receive The Money Directly Into Your Account, This Is A Pure
Coded ,Means Of Payment?

If this thing works out, I may not be writing any more art criticism for a while!

Addendum: Well, that large bank transfer should be coming through at any moment, but in the meantime the recent discovery of orientation irregularities in the Roden portion of this visual complex (see addendum to previous blog entry below) compels me to reconfigure it - here is a new version, edited to show the overlapping areas only (can anyone say "LP cover!"?): 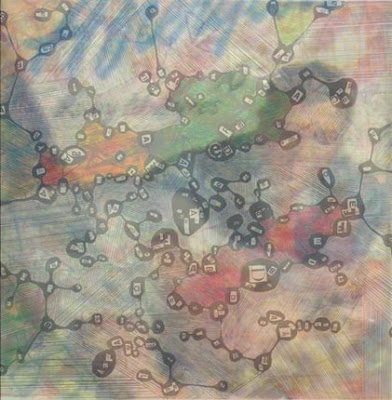 Posted by DougH at 3:13 PM No comments: Links to this post 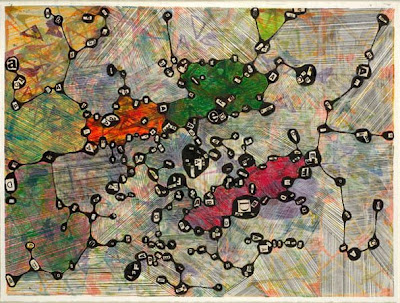 Posted by DougH at 11:20 AM No comments: Links to this post

Eelin' with the Feelin' Can it really be more than a decade since my humble self-published comic book inflicted the questionably heroic Captain Eel-Begone upon an unsuspecting world? For those who missed the very limited run of the above-pictured rarity, the main story has just been reprinted in 'Blurred Vision 4,' a yearly anthology out of NYC that showcases comics by people from the fine art and literary worlds. Just in time to cleanse the Dark Knight-saturated palates of the Comicon set. Available wherever quirky comics are sold or at the Blurred Books website.

PS: Please note the trademarked character of Quagmire appearing a full 7 years before that of Seth "spared by 9/11 to continue his important work for mankind" MacFarlane. Posted by DougH at 7:35 PM No comments: Links to this post I probably should have posted this while the show was still up, but you can get an idea at the Steve Turner Contemporary website and get a fuller picture of China's oeuvre over at ACE.

“It started with this idea that I had when I was in debt from all this health stuff [a bout with anemia], and just always scrounging for money, and never getting out of this small space. And then this thought I’ve always had about advertising: how so much of what people buy is an idea about what is going to happen when, like, ‘If I get the right gown and if I ever go to Cancun, this’ll look fabulous!’ And I wondered, could I create this whole thing all from right here? I do the pictures here, do the whole composites here, I print it here, the clothes are all made here. So it’s like this complete imagined exotic journey that all takes place in my apartment.” This ad absurdum DIY philosophy will come as no surprise to anyone familiar with Adams’ oeuvre. At 30-something, she boasts an unusually long string of solo exhibits — due to the fact that her first was at age 23, while she was still attending UCLA as an undergraduate. Her pivotal work was a classic in what might be called stripped-down performative design — the kind of event that derives a wealth of conceptual significance and emotional impact from a slight shift of the spatial relationship between 2- or 3-D objects. (Think Chris Burden’s arm and a copper-jacket .22 long-rifle bullet or Jeffrey Vallance’s relocation of Blinky the Friendly Hen from supermarket display to pet cemetery.) In Adams’ Official Cannibal Status (1993), the object in question was a tiny chunk of human flesh donated by a fellow student, which Adams — a vegetarian since childhood — displaced into her digestive tract in front of witnesses, then documented with a framed, notarized affidavit, triggering one of our species’ deepest taboos with a clinical and bureaucratic dispassion bridling with Kafkaesque irony. The elegant formal economy of Adams’ gesture notwithstanding, it was the work’s unrepentant theatricality, outrageous humor and narrative conceit that made it remarkable in the dry context of conceptualist-art practice. It doesn’t get much juicier than raw meat... All of which is my roundabout way of suggesting you check out Brian Bress' new video for Wounded Lion's Pony People on youtube, then, if you're in the neighborhood, go to their FREE live performance at the Echo on Monday (July 7). They go on around 10:30 is what I heard.
Posted by DougH at 9:55 PM 2 comments: Links to this post