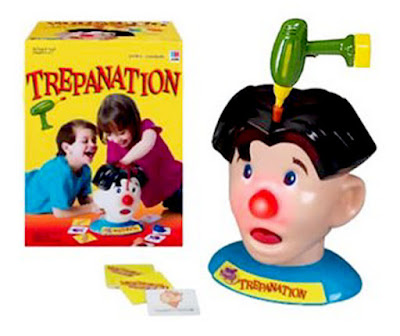 Just ran across Michael Holingshead's autobiography online, and located this great account of trying to mount a musical about trepanation in the prison chapel after he was busted...

"One of the highlights of my stay at Leyhill was the production of a physio-psychedelic musical called Paradise Lost — The True Story, which had been sent to me by Joey Mellen, friend and former associate from Pont Street, who had decided that the best way to stay permanently 'high' was by trepanning a hole in his head the size of the old sixpenny piece. The play was a strange mixture of Milton and Mellen, with lyrics in praise of trepanation or 'getting the hole'. I reproduce one of the songs below, called 'The Great Brain Robbery':

THE GREAT BRAIN ROBBERY
By Joe Mellen
Up stood the ape—down came the drag—
The beginning of the blues—
Can't talk your way out of it adult
Daddy there's a drag on you.
Oh adult the mistakes you make
You ignorant little man
Adult oh the liberties you take
You mistaken little man.
Between your meals you make your deals
And send your sons to war
Talk all you want but don't you know
We've heard it all before.
Adult will you never see
All you want is to agree—
The lies you tell to save your face
Constitute your grave disgrace.
You're losing and you think you're gaining
It's just your ego needs maintaining
Adult d'you know what is true ?
The drag is bearing down on you.
What you're trying to regain
Is blood belonging to your brain
Will you know before you're dead
That paradise is in your head ?
You was robbed—so you made belief—
It's gravity—we've caught the thief
All you prayers won't save your soul
Adult you need a hole.

Another song, called 'Brainbloodvolume', has been set to music by Julie Felix in her furthest-out number yet.

It was necessary to approach the Governor to obtain permission to stage it in the prison theatre, perhaps even before an invited audience of students from Bath and Bristol universities. I decided to plug the Milton section at the expense of the rest, feeling that the Governor would be more sympathetic to it than the modern additions.

The Governor was most attentive during my outline of the play, and wrote a memo to the Prison Chaplain that he should consider staging it one Sunday in the Church.

Accordingly, I met with the Chaplain, a nice, easygoing man with a strong sense of Christian vocation, who had been at Leyhill for four years and had a good understanding of prisoner psychology. I introduced the matter by suggesting that there is a mystery in the story of Paradise Lost that lies at the heart of all our lives. And this is older than that of Oedipus. In the play there are overtones of the great four stories of the world's various religions, and specifically of the Hebrew-Christian tradition. Guilt and Sin are pretty powerful themes of the Christian Church, and any attempt to understand their place in the world and their relevance to contemporary man was, I assured him, a matter of concern to today's criminal. One begins by depicting man as some kind of "hairless talking ape" who is unable to benefit from the possibilities of his own existence, who then has a revelation, in this instance, through piercing a small hole through his skull to increase the volume of blood to the brain.

The Chaplain looked puzzled. 'But what has Paradise Lost got to do with making holes in your head ?' he asked.

'Well, the theory is that by increasing the amount of blood to the brain the surface of the capillaries—millions of them—increases, which in turn release glucose from the blood into the brain cells. This is the physiological secret of "getting high". So the "hairless talking ape" who does not know that his "fall" (loss of brainbloodvolume) has a purely physiological cause. Thus he lives out his simple life or death without ever realising his golden future, truly the parable of fallen man.'

'It sounds all rather godless to me.'

'Well, the modern writer uses myths and metaphors in order to get his message across. And in the case of this play, he has found modern counterparts to the story of the Fall in poetry, science, and music to express an awareness that we all have, however obscurely, that there are vast capacities in man which he continually fails to realise. The message of the play is simple. If things are not right inside yourself, then change them. The evolutionary leap in being from monkey to man produced a new kind of animal, a creative animal, an animal with imagination, who could devise ways to regain the lost paradise of lost brainbloodvolume.'

'But why trepanation ?' the Chaplain persisted.

'Because trepanation offers a solution on a manageable scale.'

'A solution to the problem of staying "high".'

'But what has staying "high" got to do with putting on a musical play in my Church?'

'But I find the whole thing utterly "godless", and I could never allow such a production to be shown. And now that you have explained it to me, I doubt whether I could allow it to be performed in the theatre. Prisoners are very suggestible you know, and we could not risk wholesale trepanations. It is just what the Daily Express are looking for. I really think, Hollingshead, that you ought to concentrate instead on more practical plans for your own future than try to launch a social movement based on people putting holes in their heads. Have you ever considered the profession of the church ?'

'I'm sorry you don't like the play. I thought you would. What we are seeing today is merely the visible aspect of a universal neurosis, and the Fall myths, in whatever language, illustrate humanity's unconscious awareness of human suffering, which is the failure of humanity which Paradise Lost symbolises. God is simply a creative power which is part of human life in the Garden. A voice within man tells him that he can and should regain the lost brainblood of childhood—should exercise some degree of control over his own consciousness, in other words, which is the message of the new developing religions in the West. The problem facing the established Church is that if man lived up to his full creative capacities, there would be no religion.'

We decided to go ahead anyway, and started rehearsals. Hugh Landsdowne, a poet and magician, who had been imprisoned for growing half an acre of marijuana at his farm in Essex, linked in the I Ching; and together we made a huge stroboscopic mandala with an electric motor we pinched from one of the machines in the tailor's shop. The play was never performed in either the church or the theatre, due to the misunderstanding as to what the play was actually about; but it was seen by most of the inmates at some point in its actual unfolding; and helped keep our minds off more dangerous matters."

And here's Julie Felix's CHANGES lp cued up to BrainBloodVolume: