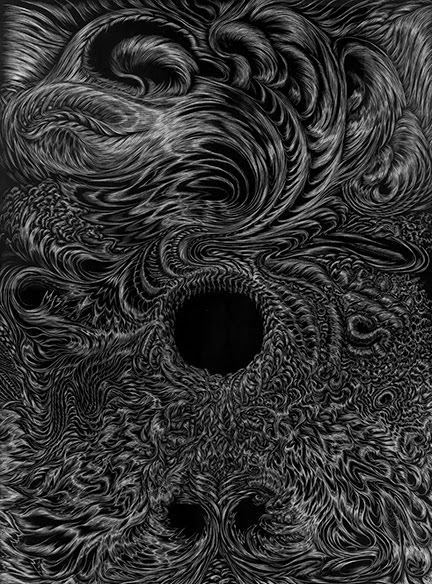 
Its palette delivers a stark Victorian vibe and a sense of dreamlike inversion, as with a photographic negative or radiograph, before the first line is even carved out. Once it has, there is a constant undeniable violence to the process – so slight as to be pleasurable, but carrying a transgressive charge. She uses a surgical scalpel to slice open her images.

Ward’s “Herworld” and “Liberty Realm” scratchboard series (1997–2014) and related projects (ranging from hand-tinted prints and digital animations, to a scavenged bathtub painted with pigment made from ground-up, hoarded hair clippings from the 1970s) emerged initially from improvised line drawing, which rapidly coalesced into intricate, illusionistic renderings of ornate, organic forms – most recognisably, hair. These are the most intimate and personal of Ward’s works, conveying none of the spectacular didactic complexity of the “Donner Party” or “Transromantik” projects (both created with her husband and frequent-collaborator Eric Wright), but verging instead on an obsessional, personal abstraction; the mapping of a Romantic inner world that is constantly seething with stormy psychological energies.

One of the specific sources Ward identifies for this symbolic turmoil is her childhood spent in St Joseph’s Convent Preparatory School, Ashford, Kent, under the questionable care of the notorious Sisters of Mercy. The Irish government’s Ryan report, as quoted by Henry McDonald in The Guardian newspaper on May 20, 2009, stated that the girls in the Sisters of Mercy’s charge “endured frequent assaults and humiliation designed to make them feel worthless.” The nuns’ ego-pulverising agenda proved fundamental to Ward’s graphomaniacal coping strategies – as were their grooming habits.

“The Order was not allowed to have hair”, recalls Ward, whose own mane, for the record, is long, dark, straight and parted down the middle. “It was cut very short – a few millimeters – at their investiture, and kept that way. As a child I was shocked, appalled, fascinated that nuns sacrificed their hair in this way. Hair in the 1960s was a symbol of liberation and this liberty was being wilfully, symbolically removed. This stayed with me in a subconscious way.”

It stayed with her consciously, as well: when the hair drawings started, they functioned for Ward as memorials for fallen comrades, particularly the unexpected passing of her former lover and countercultural mentor from the post-convent teen years, a radical post-hippy agitator named John Green. That same year (1997) marked the onset of myalgic encephalomyelitis and a battery of physical and psychological symptoms that went undiagnosed for the next decade. Ward was frequently left debilitated, unable to muster the resources to tackle the ambitious large-scale installations that had begun to garner attention. The scratchboard drawings were small in scale and socially undemanding, and became the primary portal to her creative inner realms.

Ward developed a highly complex private pictographic language, beginning with isolated depictions of ornate coiffure-fragments, but quickly morphing into landscapes and unidentifiable organic forms. Where the initial drawings often invited a figurative reading, they eventually came to be articulating cosmic psychic spaces animated by sublime tidal paroxysms and cataclysmic shudders, made up of precise trompe l’oeil vortices and webs.

Throughout these fully-evolved works, accumulations of scalpel-inscribed lines oscillate between forms that describe unseen forces – sound waves, orgone discharges, magnetic fields, the wind – and those reflecting human attempts to contain, control and channel such forces. Sometimes these attempts are sinister and oppressive: severely plaited hairdos suitable for a convent schoolgirl. Elsewhere they are benign, transpersonal, archetypal – mimicking the pagan corn dollies that crop up elsewhere in Ward’s work and represent a periodic symbolic vessel for the vegetal spirit between harvest and planting.

Considered together, Ward’s hair drawings take on the semblance of a journal – a diaristic transcription of the undulating seismic energies coursing through a long dark night of the soul. Perversely, this dedicated exploration and recording of visionary form recalls not only the decorative horror vacuii of Gill or Aloise Corbaz, but the deeply personal and idiosyncratic sign- systems pursued by the most quintessentially mainstream artists of the modern era: the Abstract Expressionists.

Ward’s drawings deploy line in all-over compositions that are as playful, deep and dimensionally virtuosic as Jackson Pollock’s seminal drip paintings. But it is one of the secret histories of the Abstract Expressionists – erased in the great Hans Hoffman/ Clement Greenberg march to flatness – that actually brings them to mind.

Before embarking on his drip odyssey, Pollock was one of a number of artists (including Adolph Gottlieb, Mark Tobey, Mark Rothko and Barnett Newman) exploring the use of invented pictographic languages – languages which were linear, symbolic, improvised, gestural, informed by both “primitive” indigenous art traditions and the Surrealists’ early interest in outsider art, and constantly teetering on the fulcrum between formalism and sign-making.

This was a turning inward in search of a universal visual language entirely open to improvisation and change. In contrast to the prevailing materialism, many of these artists regarded their work as talismanic, infused with spiritual presence and – perhaps most significantly with regard to Cathy Ward – descriptive of a visionary psychic landscape.

Combining the visionary sweep of a William Blake illustration with the meticulous authority of a banknote engraving, Ward’s hair drawings hold a dark mirror up to the culture of European male privilege in which these works were imbedded. Some qualities are reversed, some are indistinguishable from their counterparts, but their sums are, strangely, mutually validating. When it comes to “outside” versus “inside”, the important issue is which direction you are facing.