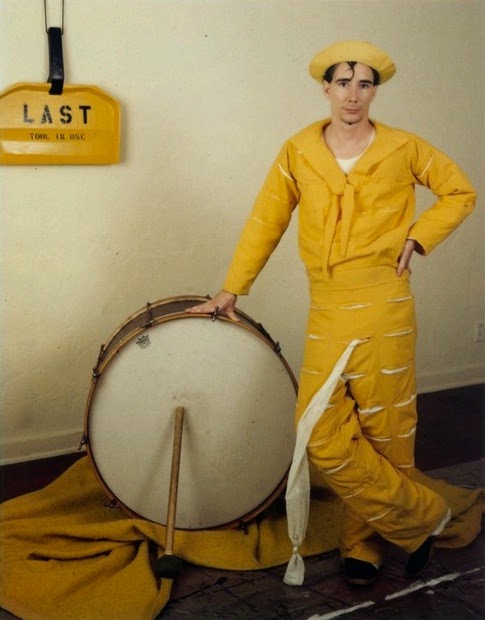 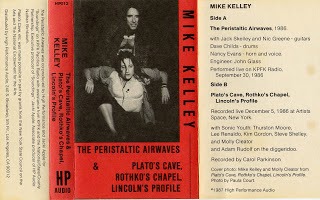 In Kelley’s superlative radio art piece The Peristaltic Airwaves (1986) and his legendary collaboration with Sonic Youth Plato's Cave, Rothko's Chapel, Lincoln's Profile (1985) – both of which received significant underground exposure in the form of a cassettes distributed by High Performance and Tellus – the once and future noise musician attained a certain apotheosis of literary ambition, grafting his deep but cartoonish familiarity with an array of modernist philosophical touchstones (from Freud to Beckett to Greenberg) onto an attention-deficit kaleidoscope of DIY populism: sex, scatology, & slapstick -- rock & roll of course -- and an eviscerating beam of sarcasm directed at Church, State, and Kelley’s betters in the Art World.

Tellingly, all of these elements can be seen in play in The Banana Man (1983), Kelley’s first completed video project. Created during his fledgling (and only) out-of-town teaching gig in wintery Minneapolis, Minnesota, The Banana Man belies and redeems its amateurish production values through the potency of its verbiage. Kelley’s facility with the cut-and-paste approach to symbolic, narrative, and philosophical structures providing plausible intentionality for the rough edits, bad acting, and 60-cycle hum.

It is also among the most Irish of Kelley’s performative outings, with Beckett-like fugues -- “Can there be growth without movement? And a stagnant pond fills with growth; fills with growth that wouldn’t be there if there were movement. I’m not moving, but I’m growing. And the growth will grow until the pond is filled and doesn’t exist anymore. That’s the loss of self” – followed immediately by a sequence in which the blind washerwoman of Justice miscarries a litter of potatoes into “the stagnant pond of life!” Begorra.

Unraveling and enumerating the specific formal and conceptual synchronicities between Mike Kelley’s The Banana Man and his lifelong Magnum Opus is more in the domain and scale of the academic dissertation than the catalog essay – but these deliberate consonances can nevertheless be experienced in the shapes, colors, words, compositions, stories, and bodily insult/celebration present in Banana and all of Kelley’s art.

And this holographic “as above, so below” cosmology holds true for each artifact in Kelley’s oeuvre, opening a loophole in the need for the permanent Mike Kelley museum. A master of semiotic legerdemain, Kelley’s multivalent symbolic manipulations opened not only to the public vocabularies of high art and pop culture, but to multiple simultaneous points of reference in his own hermetic system of meaning. 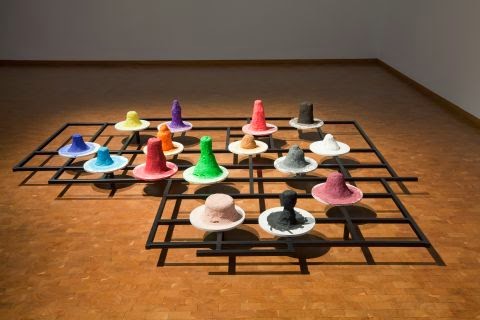 A work like Primal Architecture (1995), while touching on such apparently divergent references as Bauhaus geometry and color theory and the repressed-memory mashed potato sculptures of Roy Neary (the protagonist of Steven Spielberg’s Close Encounters of the Third Kind), it also brings to mind earlier and later occurrences of lingam and yoni forms, underling interconnecting skeletal grid structures, and the appropriation of craft technologies – the potter’s wheel in this case.

Another case in point is the artist’s Performance Related Objects (1998), which, in spite of Performance Art’s emphasis on ephemerality, remain behind as relics, imbued with an almost spiritual dimension. Each of these quirky accoutrements – DIY drums, digeridoos, and public address systems, or a model of a spiral-shaped fort -- operate as narrative nodes with tendrils reaching back to their original function as interactive props in a specific story. But as relics, their strongest conceptual connotation is the absence of the activating artist’s body, prefiguring Kelley’s subsequent obsession with the idea of the Uncanny. 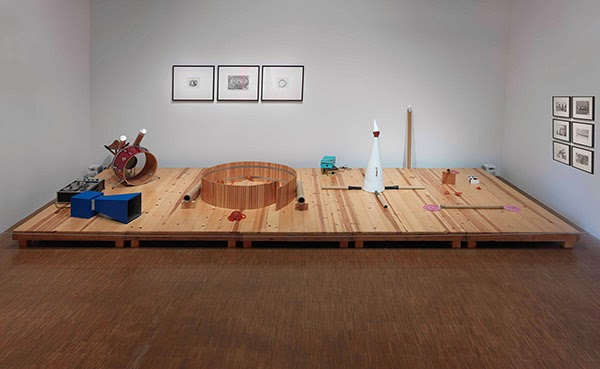 There was certainly something about the Uncanny behind my desire for a totally comprehensive archive of Mike Kelley’s art, a Frankenstein/Osiris need to stitch together all the disarticulated fragments of his corpus (though some fragments are far better represented than others) into a new dwelling place for his soul, reading the death sentence backwards. But at the same time I was genuinely intuiting that Kelley had been engaged in a revolutionary new literary form since his emergence in the late 70s.

But his innovations were even more radical than I first suspected. Initially it seemed that Kelley’s Gesamtkustwerk only had a slight chance of being comprehended fully if all its components were impossibly assembled in one place over time, for repeated full-body readings. But as I began to scrutinize the individual “chapters” and recognize their capacity to activate an intricate matrix of morphological and conceptual resonance points across space and time, I realized that Kelley had forged an epic whose grand sweep could be fathomed in the humblest of its constituent parts, wherever two or three pieces were gathered in his name. Long live the New Flesh!

The first time I encountered the work of Mike Kelley I knew he was depressed. The work depressed me too. Like nothing else in Xanadu. It's that awful twilight moment when the whole world is one big bruise. The sadness gets under your skin and parks itself permenente. Mike always leaves me that way. In pain.
Not just pain though. For me, a Mike Kelley moment is trauma, violent and deep.
I want to run away so fast that my feet can't carry me.
All that dirt, grunge, sweat and sour desperation soiling a universe where the stain of human habitation marks a degree of awfulness that will not cease.
~
Mike's Art is one Great Work in a majorly minor key of deep despond.
That Coltrane riff at midnight in a Club full of lost souls sinking fast to the gentle sing song of an interior monologue by James Joyce standing on a bridge over the river Liffey.
But the Bridge is a cliff with an invitation to dive deep into the caress of a consoling velvet darkness.
Where else to go...
It is a better place to be. Just a step away and then free.
It beckons ever so nicely. C'mon Lad go with me...