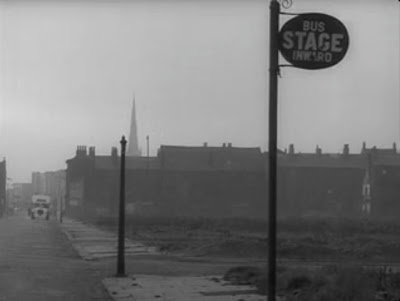 Finally got around to watching Lindsay Anderson's 1967 short The White Bus, which - informed by his background in industrial PR documentaries - is kind of like Magical Mystery Tour if it had been made by Throbbing Gristle. It's just one of 80+ films on my streaming queue that are suddenly scheduled to disappear on Mayday - including Kubrick's sumptuous noir Killer's Kiss, Altman's early JD B-flick The Delinquents (starring Tom "Billy Jack" Laughlin), Ken Loach's Kes, Richard Lester and Spike Milligan's The Bed-Sitting Room, Billy Wilder's One, Two Three, and Peter Brook's Marat/Sade -- as well as such less widely celebrated celluloid artifacts as Alan Johnson's Solarbabies (one of the finest post-apocalyptic rollerblade movies in the canon), William Dear's Timerider: The Adventure of Lyle Swann, Denis Sanders' Invasion of the Bee Girls, and Philip Kaufman's debut Fearless Frank - a high-camp 1967 Jon Voight superhero vehicle narrated by Ken Nordine! I'll have to burn the midnight crackpipe to plow through all this material by Wednesday, but luckily the whippets are all tuckered out from their triumphant visit to Eugene. More on that later...
Posted by DougH at 2:42 PM