"Everyone else gets a preview of their work, so I thought I should get a preview of my work. I'm so sick and tired of everyone else getting everything they want and me being ignored and hated by people who don't even know me, just like in high school. But maybe this blog will change everything, and I can get on the A-Team again, like I was when I wrote for LA Weekly! Then I'll know that people really really LIKE me!"

Here's a sample of my latest soundwork... I've been feverishly abridging the audiobook version of Wil Weaton's autobiography for the one-night-only HOLODECK show curated by Brad Eberhard as one of PØST's Kamikaze shows this Thursday, July... well, maybe we should just let the press release explain it...
The HOLODECK
PØST
Thursday, July 26th
7-9PM

The Holodeck is a simulated reality facility on the USS Enterprise NCC-1701-D, the primary setting of the American science-fiction television series Star Trek the Next Generation. The characters on the show use the Holodeck for a variety of applications, including recreation, training, and problem solving. Although crew members can program in the environment or scenario they wish to inhabit, they cannot necessarily control their experience once inside. Things go wrong with it pretty regularly. People get stuck inside and can’t get out. Like art, the Holodeck is an ideal world in which refreshment and conflict go hand in hand.

The HOLODECK is a group show whose participants were each given a card from a deck of Star Trek the Next Generation playing cards as a prompt for an artwork. Each person was presented with the option to select a card with a specific character/theme or to receive a card randomly from the deck. The breakdown was about 50/50, specific vs. random. They could use the their card as a source, an object, or the starting point for any manner of conceptual strategy that suited them. The show will include a variety of 2, 3, and 4 dimensional media.

Some participants identified themselves as fans of the show, while others have barely seen it. Regardless, in producing a work for the exhibit, all have approached and interacted with the substantial, multiple–faced icon that is Star Trek the Next Generation. When the work is considered all together, the sly cross-fades with the sincere, creating a curious harmonic dissonance, humming with possibility. 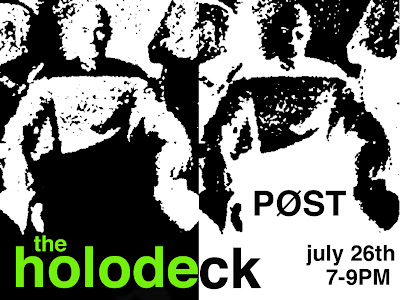