...and Perversities Yet to Come. 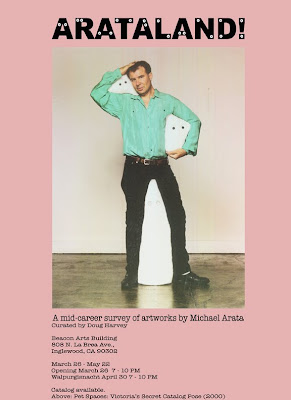 The exhibit will run for eight weeks closing on Sunday, May 22, 2011 with a Critics-as-Curators panel discussion from 1:00 to 4:00pm. Beacon Arts is located at 808 N. La Brea Ave., Inglewood, CA 90302. For additional information please call 310-621-5416 or visit beaconartsbuilding.com as well as on the BAB facebook page.
Arataland! A Mid-Career Survey of Artworks by Michael Arata will kick-off on March 26th with an opening reception from 7:00 to 10:00pm. Join the artist for the unveiling of a new mural on the side of the Beacon Arts Building – a large rendition of a piece from Arata’s Pet Spaces series. Additional special events include “Deconstructing Arataland” an exhibition walkthrough and conversation with Michael Arata and Curator Doug Harvey on Sunday, April 10th starting at 1:00pm. At the end of the month on Saturday, April 30th, or Walpurgisnacht (a Northern European pagan renewal ritual), join the gallery for “One Night Stand: Walpurgisnacht” from 7:00 to 10:00pm. Like one of Arata's famous One Night Stands – his series of one-night guerrilla exhibitions held in motel rooms dating to the late 1990s – the evening will center around a hot dog/drawing exchange, whereby guests can create a drawing in exchange for a hot dog in a bun branded with Arata’s signature. A 60-page catalog, containing a map of Arataland! will also be published in conjunction with the exhibit and will be for sale at the gallery. All Arataland! events are free.

A native of Northern California, Michael Arata has been active in the Los Angeles art scene since relocating here in the early 1980s. His restlessly creative mind has led him from prescient large-scale site-specific installations addressing ecological sustainability, through elaborate arrays of sculptural works detailing the biological life cycle of angels (including the “larval” stage) to elegiac paintings of the hairstyles of unidentified possible victims of an LA serial killer, and interactive game sculptures conflating minimalist formal aesthetics with the impregnation of flamenco dancers and lawn bowling.

With Duchampian wit and impressive formal chops, Arata has amassed a formidable body of work, consistently undermining the sweetness of his primary-hued entities with dark – but deeply humanistic – undertones; balancing confrontational statements on politics, religion, bestiality, and poop with an open, playful and unaffected relational agenda; and layering his always entertaining pop discourse between enigmatic, personal symbolic systems often deriving from scientific or historical sources. Entertainment being the key word – Arata’s work may alternate between endearing, outrageous, brain-tickling, and laugh-out-loud funny, but it is never, ever boring. – Doug Harvey
Posted by DougH at 3:02 PM