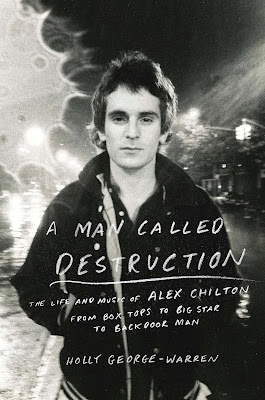 Just started reading this bio of Alex Chilton, which starts off with an awesome "as spoken to Epic Soundtracks" quote:


Somewhere along the line I figured out that if you only press up 100 copies of a record, then eventually it will find its way to the 100 people in the world who want it the most.

(which is from a long interview available here). But the strangest thing was the rollercoaster of engagement and identification that V experienced due to a strange parallel in our early years. The first chapter consists of the usual genealogical backstory - interesting enough due to Chilton's aristocratic southern (ie: slave-owning) roots, but pretty dry.

But when it gets to Alex's childhood, and his brother falls out of a tree and goes into a coma, i started to get a funny feeling. The brother, Reid - 10 years older and Alex's idol - recovers but starts getting intermittent seizures. Sure enough, just about the time he's graduating from high school, be has a seizure in the bathtub and drowns!

My beloved 10-years-older-than-me sister drowned in the bathtub during a seizure when she was 20, and it was probably the formative event of my adultish personality, so this reading experience - going from this scholarly and impersonal family tree tone to a biographical anecdote that couldn't be any more personally riveting - all in the space of a couple of paragraphs - was pretty unique, and weirdly dreamlike.

So i'm hooked - i'll report back on any further synchronous phenomena. But if he runs off with a physiotherapist at age 15 i'm going to freak out.

UPDATE: It's been awhile since I finished reading this, but a couple of other synchronicities emerged: Not only did Alex's brother drown in the bathtub, but he was one of three (including Alex). Though not myself the victim of this most demanding of birth orders, those familiar with my unpublished pop anthropological blockbuster "The Trois Freres Syndrome" will know what I'm talkin' bout.

The other thing was that at a certain point when he'd already had his superstardom with the Box Tops, his failed artistic geniusy period with Big Star, and his eccentric proto-Punk psychobilly notoriety, he retired to New Orleans to dry out (!) and spent several years just washing dishes at a club to pay his way, playing music with friends occasionally, and apparently totally content. That is a mighty reversal of the default rags-to-riches journey at the heart of so many artistic biographies.

That's about it. I'm kind of more interested in his engagement with fame and money and his art than I am with his actual recordings, awesome as many of them are. There's some quality of interpersonal political responsibility and improvisational spontaneity at work in each of those areas that seems more surprising and creative than a lot of the music he recorded. Which I gather was ultimately the point.