Return of the Moldy Slides 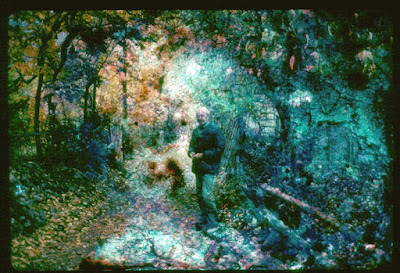 Event is free, but please RSVP at
https://www.eventbrite.com/e/doug-harvey-return-of-the-moldy-slides-tickets-45819255627
(Campus parking is $2)

After a five-year hiatus, Doug Harvey returns to his archive of found moldy slides to curate his first new presentation since Rhizomatic Transmissions, which screened at The Museum of Jurassic Technology, Hammer Museum, UCLA, Echo Park Film Center, and various other Los Angeles and West Coast venues.

Compiled from a collection of several thousand 35 mm photographic transparencies found in the detritus excavated from a local hoarder's house during an apparent intervention, the slides had been subjected to flooding and grown various types and degrees of fungal layers, altering the pictorial content of the emulsion -- sometimes slightly, sometimes transforming the image into a total abstraction.

Harvey describes the resulting (washed and stabilized) artifacts as " a stochastically linked collaboration between the original vacation photographer, crazy hoarder dude, the mold, and me – plus the found and improvised soundtrack elements, and finally the audience.”

Return of the Moldy Slides will consist of a new selection of the actual original slides using vintage Kodak carousel projectors, and will be accompanied by a live performance of improvised music by The Friendliness Happening.
Posted by DougH at 7:43 PM