Recovered from the Void 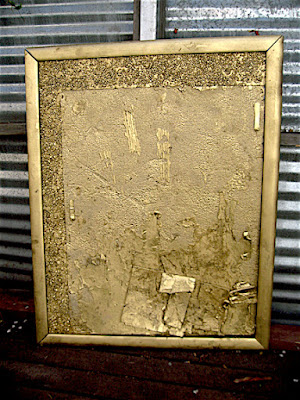 The demolition team that was doing a partial cleanup while the roofers were replacing the roof on our current home accidentally threw out a few things that weren't supposed to get thrown out, including my 2010 pre-rotted painting-thing Dream House, which I'd actually promised to Constance Mallinson, who actually liked it. Luckily, the crew seems to have disappeared and left their gigantic chockfull construction dumpster on the street in front of the house, and I managed to excavate the work (and a couple of other items) -- now bearing considerable more evidence of the collaborative input from the forces of entropy. To ensure that it will forthwith be recognized as the precious object that it is, I immediately made it into the latest installment in my "Gildings" series. Behold!
Posted by DougH at 12:38 PM