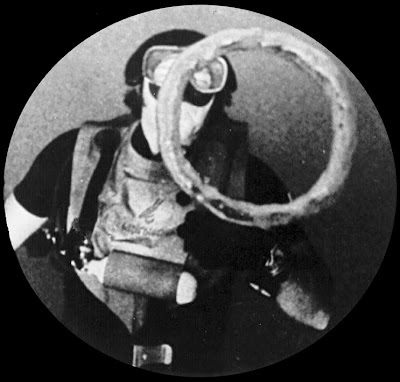 It’s an Origami Moment!” exclaims the email announcement. “MIT trained engineer Dr. Jeannine Mosely has discovered a new fractal, the Mosely Snowflake Sponge. The USC Libraries has taken up the challenge to build this amazing form out of 49,000 business cards. During summer 2012, workshops will be held at the USC Doheny Library and at the IFF’s new Chinatown space to make this fractal sculpture. We invite you all to come and help!”

You wouldn’t expect a cutting-edge cultural institution to be expending such enthusiasm over something so, well, totally geeky. But the Institute for Figuring (IFF) knows their audience, and they know what works for them. It was, after all, a closely related project — the 2006 presentation of Mosely’s Business Card Menger Sponge, a piecemeal collaborative construction involving nine years, hundreds of volunteer origamists, and 66,048 business cards that resulted in a nearly seven-foot-tall sculptural artifact — that helped establish both the IFF and host venue Machine Project as forces to be reckoned with in the Los Angeles art world. 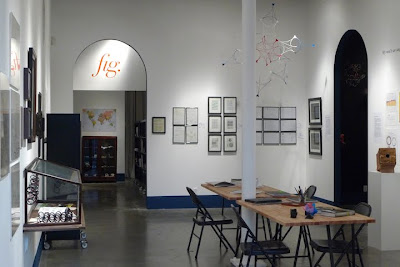 The fact that the final form of the Business Card Menger Sponge was nearly a textbook illustration of serial Minimalist sculpture circa 1971 — a monochromatic 81-inch square cube riddled with precise rectilinear gaps determined by a fractal equation — added a droll art historical subtext to the presentation, but it wasn’t nearly as superficial or coincidental as it may have appeared.

As compelling as the best of the math-and-science-fetishizing geometric abstractions of that era were (and many dovetail elegantly with the IFF’s vision), there was a hidden Puritan agenda at work — Pure Science’s alleged lack of distracting sensuality was employed to gain leverage in an overlong argument between Romantics and Neoclassicists about whether purple was a number or a feeling. “See? If Art is meant to reflect reality, and Math and Science — the best tools we have for describing reality — are colorless and boring, then the only Pure Art must be as colorless and boring as reality!” 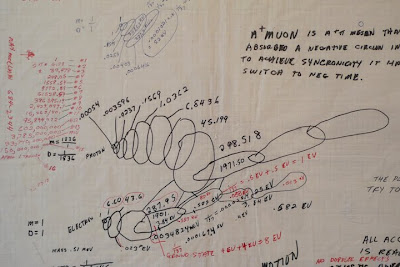 The problem is, science and math were never colorless and boring; they just didn’t have colored ink for computer printouts in 1971. The IFF knows this, and part of their mandate would appear to be the rehabilitation of the hard sciences from their paradoxical reputation as harbingers of a posthuman anesthetic gray haze and to recognize them for the sensually hardwired, beyond-psychedelic, non-verbal languages that they are. At least that’s my take. The IFF takes a more modest tack, identifying their core concept as “material play… a new, hands-on approach to public science education that is at once intellectually rigorous, pedagogically rich, and aesthetically aware.”

As reassuringly public-service as that sounds, it doesn’t quite capture the organization’s penchant for uncovering and celebrating some of the most idiosyncratic visionary individuals operating in the world of science, a leaning that goes back to their very beginnings. The IFF came into being around the time and occasion of a remarkable exhibit at the Santa Monica Museum of Art in the fall of 2002, entitled Lithium Legs and Apocalyptic Photons: The Imaginative World of James Carter. Carter is a trailer park owner in Enumclaw, Washington who has spent most of his life — when not prospecting for gold or diving for abalone — developing unique and radical theories to replace what he feels to be the inadequate physics of the quantum era...

Read the rest of Go Figure: Los Angeles’ Most Quizzical Institution Finds a Home here, or after the jump. 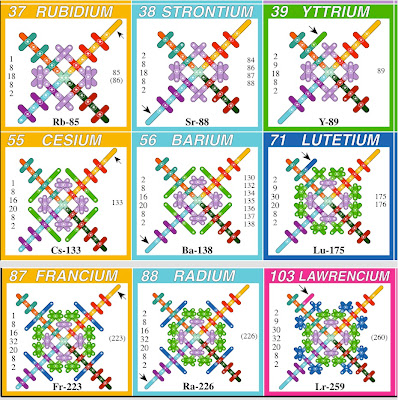 
Science writer Margaret Wertheim had been following Carter’s degree-free work for nearly a decade by the time she guest-curated the dazzling assemblage of diagrams, models, and charts detailing Carter’s theory of the “circlon" structure of atomic particles, his revised periodic table of elements, and related fallout. Wertheim’s presentation teetered equally between scientific inquiry and biographical and sociological profile, but leaned mostly towards an uncondescending acknowledgement of the tremendous creative energy at work and the sophistication of the visual and tactile vocabulary that embodied it. Possibly apart from a couple of exhibits in the Museum of Jurassic Technology, it was like nothing anyone had seen before. Shortly after the Lithium Legs show, Wertheim and Christine, an experimental literary scholar and Margaret’s twin sister, founded the IFF to continue research and presentation of cultural phenomena that straddled the border between hard science and fine art.

The results were spectacular. Manifesting through a series of host venues including the aforementioned Jurassic Museum and Machine Project, as well as Art Center College of Design and the Los Angeles County Fair, the IFF launched a series of extraordinary exhibits examining such visually rich fringe-science sidebars as Shea Zellweger’s handcrafted wooden models of his influential X-stem Logic Alphabet and the proto-modernist artifacts generated for and by nineteenth-century German pedagogue Friedrich Froebel’s original envisioning of kindergarten.

By far the greatest impact has come as a result of the observation by Cornell University mathematician Daina Taimina that many difficult-to-visualize hyperbolic mathematical forms could be easily rendered in crochet. This single seed of an idea eventually blossomed into the global collaborative environmental craft-geek installation The Hyperbolic Crochet Coral Reef, 2005, a phantasmagoric rendering of the embattled Great Barrier Reef of the Wertheim’s homeland Australia. To date, the HCCR has garnered enormous publicity and been shown in dozens of venues around the world, including the Warhol Museum in Pittsburgh, the Hayward Gallery in London, and the Smithsonian Institute in Washington, D.C.

This whirlwind of activity engaged most of the IFF’s attention and resources for the last several years, but nevertheless in the late spring of 2012 they were able to realize a long-held ambition — the opening of a dedicated exhibition and programming space on Hill Street in the heart of L.A.’s always-festering Chinatown Art District. The inaugural exhibit Physics on the Fringe, open through Oct. 14 2012, is largely devoted to the work of James Carter and similar mavericks — as is the book of the same name authored by Margaret Wertheim and published to wide acclaim late last year by Walker & Co.

The new space is long, narrow, and segmented, like a giant worm — and once it spits you out, you’ll never be the same. Encompassing antechambers bearing names like The Anti-Gravity Annex and The Hyperbolic Imaginary, the IFF is strongly reminiscent — in architectural detail if not lighting quality — of the Museum of Jurassic Technology’s beloved faux-authoritative institutional vernacular. But where the MJT uses that trope to toy with the viewers suspension of disbelief, the IFF approaches wonder from a different angle — bestowing institutional sanction on the deep interconnectedness of our visual, tactile, and scientific ways of understanding reality, and leaving it to them as can do the math to take their differences elsewhere. Because, like most artists, I may not really know science, but I really know what I like!
Posted by DougH at 2:30 PM