Tom never uses the announcement designs I make. But I distribute them anyway. Here's the latest, modified from the source of the show's title - an advertising postcard for vinyl siding.

JANCAR GALLERY is pleased to announce a special exhibition of work by Doug Harvey:
"NEVER PAINT AGAIN"
May 19 - June 16, 2012
Opening reception for the artist: Saturday, May 19, from 6 - 9 PM

"The major portion of this exhibit came to me in a dream about 6 months ago – the giant sculptural/architectural painting/installation in the front, leading into the series of collages in the backroom. In the dream it was specifically installed in Jancar Gallery, and I pitched it to Tom on that basis, without expecting him to take me up. I often dream of artworks, but this one was unusual because all the elements for the main piece - some very specific - were materials that I had on hand. 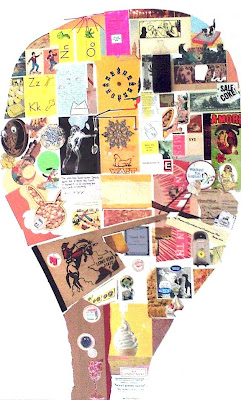 Plus I had been looking for a new modular configuration for my collage works, which the dream prefigured. The resulting collages will eventually comprise an experimental non-linear novel of sixty-four 50 X 38 inch pages, entitled The Cryogenic Angel, the first chapter of which (History Lessens) was recently shown at Beacon Arts Building as part of the LOOP show. Never Paint Again debuts the second and third chapters, Eradication Age and Lorem ipsum Über Alles. 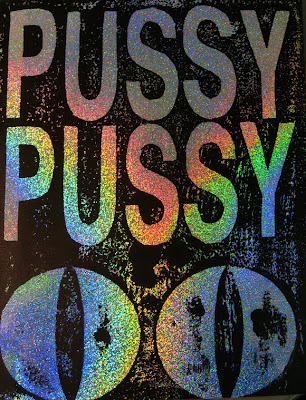 "Never Paint Again" also marks the release of a hand-crafted zine entitled Pussy Pussy in a limited edition of 40, edited by me and created in collaboration with other artists. Seven of the 40 are deluxe collectors editions, housed in a set of chairs – unauthorized collaborations with designers Mark Zuckerman and Monty Lawton, a stack of whose transparent plexi “pocket chairs” I found legless on the streets of Culver City, and made whole to the best of my abilities. The idea of using pocket chairs as display/distribution racks for a DIY publication I stole from Mark Dutcher." 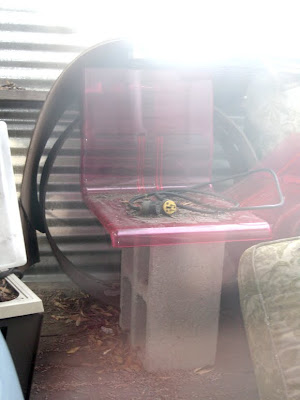 In addition, a number of related performances will take place on the evening of the opening.

tom should have used your announcement design!!!

legless on the streets of culver city!