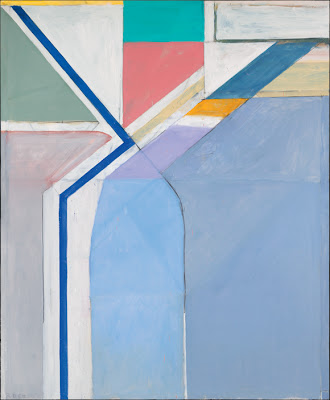 This'll be in next month's (May 2012) print edition of Modern Painters, but it's already up on artinfo, so here's my take on the Diebenkorn Ocean park retrospective at OCMA; I don't know why they switched out my awesome title for a very utilitarian one, but it's restored above!

"During the Summer of Love in the Ocean Park neighborhood bridging the L.A. coastal communities of Venice Beach and Santa Monica, a well-established middle-aged painter moved from one studio into another, better lit one. Physically, the shift was nominal, but it prompted Richard Diebenkorn to abandon his successful signature style of saturated Matisse-like depictions of seated women and tabletop detritus to embark on a radical new direction. It wasn’t the first time he had done this—but it was the last. The “Ocean Park” series was the artist’s big shift into pure abstraction. 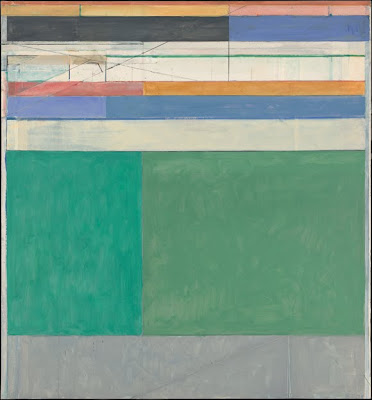 It would hold his attention for the remaining decades of his life (which ended in 1993) and represent one of the most acclaimed bodies of work in the history of 20th-century painting—lyrical drafting-table palimpsests; layer upon layer of incrementally reconfigured rectilinear lozenges of nuanced chroma; a squashed cubist armada endlessly jostling in a Pacific-hued harbor. Edward Hopper in Flatland, deprived of his magic hour shadows and intricate architectural scaffolding, but finding new life in crisp aerial origami topographies enclosing cloudy washes of muted complements. Stained glass permutations and combinations, dripping beauty. The Bomb.

Unlikely as it seems, Diebenkorn’s “Ocean Park” series—ultimately comprising hundreds of paintings, drawings, collages, and prints created between 1967 and 1988—has never been the subject of a comprehensive museum exhibition until just now. “Richard Diebenkorn: the Ocean Park Series” seems to have been hovering in the Coming Attractions section of the Orange County Museum of Art’s schedule for half a decade.

Apart from the economic crisis, the major obstacle has been logistics—as curator Sarah Bancroft points out, “There are ‘Ocean Park’ works in over 45 museum collections in the U.S., but only two institutions own more than one of them.” More widely acknowledged than deeply understood, Diebenkorn’s magnum opus has been fragmented and scattered across the landscape. “The grand diaspora of major works,” opines Bancroft in the awesome, copiously illustrated catalogue, “has ensured that audiences rarely have the opportunity to view ‘Ocean Park’ works in their depth and their diversity of media.” 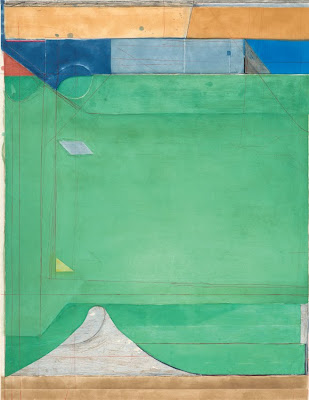 Audiences finally have their chance. “Richard Diebenkorn: the Ocean Park Series” debuted at the co-organizing Modern Art Museum of Fort Worth last September and arrived in Bancroft’s Newport Beach base of operations in late February. After May, it moves on to the Corcoran Gallery of Art, in Washington, D.C., for the summer, which will give Yankees one more chance to reassess their tippy canon. 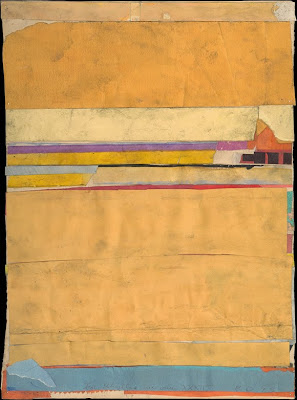 The OCMA installation will be hard to beat—most of the museum’s half-dozen galleries are devoted to the exhibit and each of the large canvases is apportioned an expansive wall unto itself, a masterful curatorial decision that allows each work to unfold its architectonic structure into the nooks and crannies of the white cube (if ever there was an argument in favor of institutional white cubism, this show is it!) and initiates a complex four-way dialogue between the occupants of each room. The curious non-linear stylistic development of the “Ocean Park” series subverts the exhibition’s chronological sequencing, resulting in a larger, more complex—and somewhat arbitrary— version of these intimate arguments. Epic. 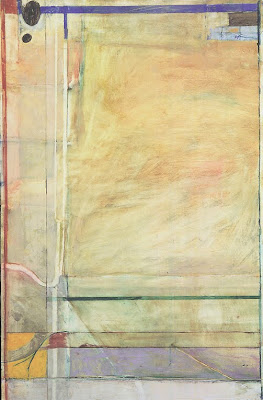 Two narrower galleries feature prints, collages, and smaller paintings, all remarkable in that they are lesser works only in size and dollar value. It is apparent that Diebenkorn put some effort into conquering the bugaboo of scale, and these miniatures—along with a sequence of painted cigar-box lids the artist presented to his friends, which anchor a wall in one of the larger galleries—more than hold their own in the company of the big boys: A small gouache on paper such as the atmospherically flesh-tinted Untitled #8, 1988, contains all the compositional intricacy and exquisite color of a similar gargantuan work, Ocean Park #83, 1975. 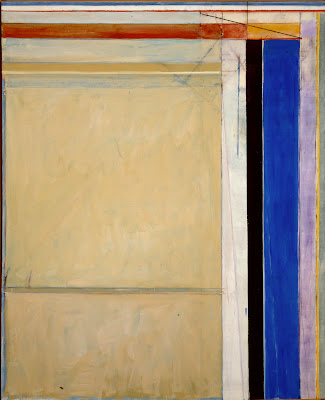 It took me some years to warm up to the pieces in Diebenkorn’s “Ocean Park” series, and I came to them through his earlier work. At the time—the early 1980s—the “Ocean Park” works held center stage. It was the most visible and best received of his oeuvres. Its popularity and adherence to the still-powerful modernist obsessions with geometry and flatness in painting had all but pushed Diebenkorn’s earlier, gushy abstractions and contrarian figurative work into the wings. To me, the paintings seemed like so many impressionist envelopes and file folders scanned from above. 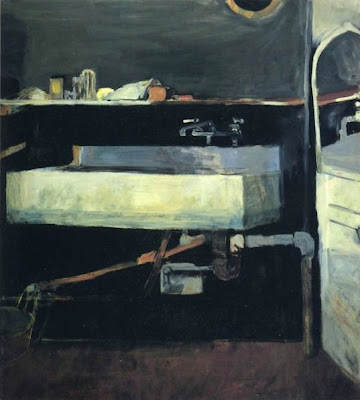 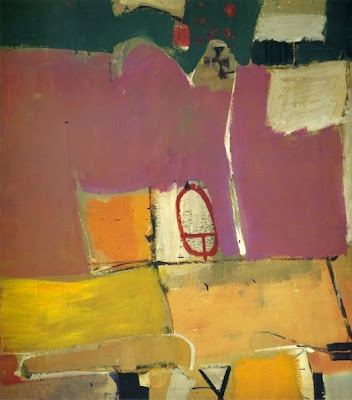 When I discovered the heavily impastoed, loosely gestural still lifes and luminous abstract patchworks of color from Diebenkorn’s previous incarnations, I was shocked (a not uncommon response I later found out) to realize that this was the same Diebenkorn whose serene and cerebral geometric abstractions seemed to owe more to Sol LeWitt than to Willem de Kooning..."